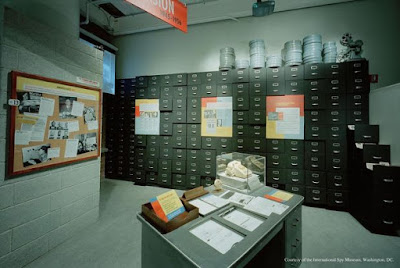 I saw "Spies, Traitors, Saboteurs: Fear and Freedom in America" when the exhibit appeared at the National Constitution Center in Philadelphia.

I liked the International Spy Museum's exhibit, but I had a few questions about the lack of a mention of al-Qaeda or a photo of Osama bin Laden anywhere in the 9/11 portion. The exhibit did however offer a row of photos of white supremacists nearby.

So, as I noted in my column for Counterterrorism magazine at the time, if one did not know better, a visitor might assume the KKK attacked the World Trade Center and the Pentagon.

One hopes the traveling exhibit has corrected that omission.

The exhibit is now appearing in St. Louis, Missouri and Alex Siegman at the St. Louis Post-Dispatch offers a piece on the exhibit.


A renowned traveling exhibition from the International Spy Museum in Washington, D.C., made its debut Saturday at the Missouri History Museum.
“Spies, Traitors, Saboteurs: Fear and Freedom in America” opened in 2004 and has been touring since 2005. St. Louis is the final planned stop for the 6,000-square-foot exhibit, which explores nine major terrorist events in U.S. history — the motivations for the attacks, public and government response, and more.
“They want to show that terror and sabotage and espionage — they’re not new things,” says Adam Kloppe, writing and research fellow at the Missouri History Museum. “This isn’t something that started on 9/11 or with the Oklahoma City bombing, but it’s something that’s been with us since the very beginning.”
You can read the rest of the piece via the below link:

You can also read my Threatcon column on the "Spies, Traitors, Saboteurs: Fear and Freedom in America" exhibit via the below link:

http://www.pauldavisoncrime.com/2011/05/history-of-spies-traitors-saboteurs-on.html
Posted by Paul Davis at 2:31 AM