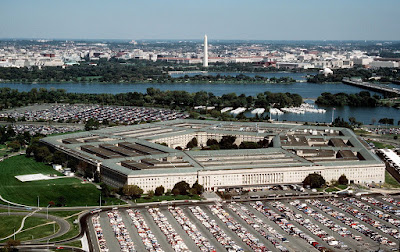 Simply order the Pentagon to prioritize climate change in all military actions.

Rowen Scarborough at the Washington Times reports on the Obama administration's plans.


The Pentagon is ordering the top brass to incorporate climate change into virtually everything they do, from testing weapons to training troops to war planning to joint exercises with allies.
A new directive’s theme: The U.S. Armed Forces must show “resilience” and beat back the threat based on “actionable science.”
It says the military will not be able to maintain effectiveness unless the directive is followed. It orders the establishment of a new layer of bureaucracy — a wide array of “climate change boards, councils and working groups” to infuse climate change into “programs, plans and policies.”
... The directive, “Climate Change Adaptation and Resilience,” is in line with President Obama’s view that global warming is the country’s foremost national security threat, or close to it. Mr. Obama says there is no debate on the existence of man-made global warming and its ensuing climate change. Supporters of this viewpoint label as “deniers” any scientists who disagree.
But there are stubborn doubters. A climate center in Colorado has said its researchers looked at decades of weather reports and concluded there has been no uptick in storms. The United Nations came to a similar finding, saying there is not enough evidence to confirm an increase in droughts and floods.
You can read the rest of the piece via the below link:
http://www.washingtontimes.com/news/2016/feb/7/pentagon-orders-commanders-to-prioritize-climate-c/
Posted by Paul Davis at 12:45 PM