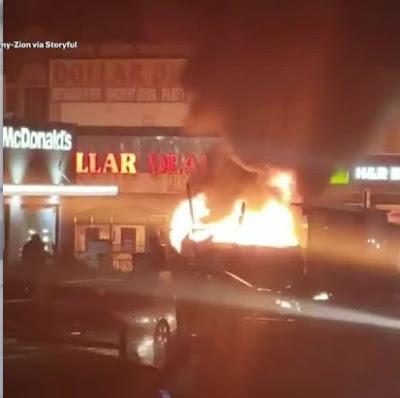 Fox 29 news in Philadelphia reported on the riots in West Philadelphia following the fatal police shooting of a man with a knife.

PHILADELPHIA - A total of 30 Philadelphia police officers were injured Monday night amid citywide unrest that following a deadly police-involved shooting in West Philadelphia.

The tense scenes unfolded outside the 18th Police District near 55th and Pine Streets through the night Monday.

According to police, 30 officers are in stable condition and have been treated at local hospitals after most were struck with rocks and bricks as they faced off with demonstrators.

A female officer remains in the hospital with a broken leg after police say she was struck by a pickup truck.

10 people were taken into custody and are being held at the 18th District Booking Center after authorities say they were involved in an incident near the district. Those in custody will be processed and released pending future charges for rioting and/or assaults on police.

In all, nearly 40 arrests were made in connection with looting and vandalism across the city. Police cars and dumpsters were set on fire as police struggled to contain the crowds. Local businesses were among the stores looted and additional police and fire vehicles were among the property vandalized.

You can read the rest of the piece and watch video via the below link: