Ralph Cipriano: A Failure Of Leadership In Philadelphia 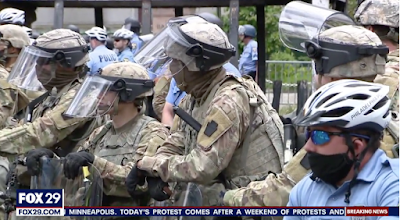 Ralph Cipriano at Bigtrial.net offers a piece on Philadelphia’s political leadership during the rioting and looting following the fatal police shooting of William Wallace Jr.

On a day when the National Guard was being sent in to restore order, all Philadelphia cops were pulling 12 and 16 hours shifts in the wake of rioting and looting over the fatal police shooting of Walter Wallace Jr.

The cops made some 174 arrests during the riots, but the cost was 58 injured officers, the most serious of which was a female sergeant who's still in the hospital after she got hit by a truck and broke her leg.

Besides the wounded officers, 16 police vehicles and one Fire Department Rescue Unit were damaged by rioters. Some 210 businesses were looted and sustained property damage. Across the city, 11 ATM machines were blown up by explosive devices.

In the wake of the latest round of civil unrest, former Mayor John Street made headlines by telling anchorman Ukee Washington of CBS 3 that the blame for the fatal shooting of Wallace rests on a "failure of leadership." Street was talking about Mayor Jim Kenney and Police Commissioner Danielle Outlaw, who told Washington, "It's really easy to sit back and Monday morning quarterback.”

Meanwhile, the city's murder rate continued to climb. Philadelphia had seven shootings and one homicide overnight, and the city is now up to 412 homicides for the year, with a full two months to go. And a veteran cop added one more name to the city's list of failed leaders.

"This city is out of control under Jim Kenney, Larry Krasner and Danielle Outlaw," a senior police commander said. "These three are the faces of failed progressive policies."

“This is a failure of leadership," former Mayor Street told Washington. "We take nine months to train someone to be a member of the Philadelphia Police Department. We spend tens of thousands of dollars. It is inexcusable for those police officers to be there without the proper equipment. The only person that you can hold responsible is the leadership of the city. That situation should've never have happened."

Street was talking about the two cops who shot Wallace not having tasers at their disposal. So Washington asked Outlaw why aren't all Philly cops outfitted with Tasers.

“I do know that there has been a line item in our annual budget for $900,000 for tasers," Outlaw told Washington. "That has been approved. No one has said no, we’re not going to give you this money."

"Did there need to be some rethinking in how we deploy the tasers or the amount of tasers that we were purchasing?" Outlaw asked rhetorically. "Maybe, but to say it’s a failure of leadership I think not only is it unfair, but I think it’s really easy to sit back and Monday morning quarterback."

The city has not yet released the toxicology report on Wallace, but don't be surprised if he was loaded up on drugs. Some cops who watched the video of Wallace charging the cops with a knife wondered whether Wallace was on PCP.

If he was, there's a good chance that even if the cops had Tasers, they might not have been effective against Wallace.

Street, however, is right about a failure of leadership. Right now, the brass in the Philadelphia Police Department, thanks to a purge by Mayor Kenney, doesn't appear to have any idea of what they're doing.