My Threatcon Column: The Cop Is A Spy: NYPD Officer Charged With Being A Communist Chinese Illegal Agent 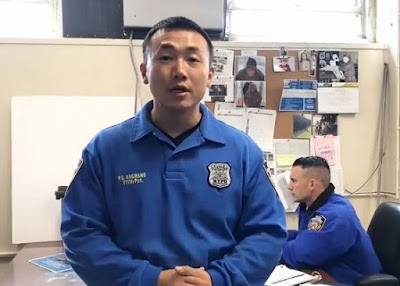 You can read the column below or via the below link:

The Cop is a Spy: NYPD Officer Charged With Being a Communist Chinese Illegal Agent

By all accounts, Baimadajie Angwang (seen in the above NYPD photo) was a dedicated public servant. The 33-year-old ethnic Tibetan and U.S. naturalized citizen not only served as a New York City police officer, he also served as a staff sergeant in the U.S. Army Reserve. He was also, the U.S. Justice Department claims, a spy for Communist China.

On September 21st, the Justice Department announced that Angwang was charged with reporting to officials of the People’s Republic of China (PRC) the activities of Chinese citizens and served as a talent spotter for Chinese intelligence among the Tibetan community. He was also charged with wire fraud, making false statements, and obstructing an official proceeding. Angwang held a “SECRET”-level security clearance with the U.S. Army.

“State and local officials should be aware that they are not immune to the threat of Chinese espionage,” said Assistant Attorney General for National Security John C. Demers at the press conference. “According to the allegations, the Chinese government recruited and directed a U.S. citizen and member of our nation’s largest law enforcement department to further its intelligence gathering and repression of Chinese abroad. Our police departments provide for our public safety andare oftenthe first line of defense against the national security threats our country faces. We will continue to work with our state and local partners to protect our nation’s great police departments.”

According to the Justice Department, Angwang worked in the NYPD’s community affairs unit where he served as a liaison to the community in the 111th Precinct. Under the control and direction of the PRC Consulate in New York City, going back perhaps as far as 2014, Angwang reported on Chinese citizens in the New York area, spotted and assessed potential intelligence sources within the Tibetan community in New York and elsewhere, and provided PRC officials with access to senior NYPD officials through invitations to official events.

According to Court evidence, most probably obtained via an FBI wiretap, Angwang told his PRC handler that he wanted to get promoted within the NYPD so he could assist the PRC and bring “glory to China.”Angwang also told his handler that superiors in Beijing “should be happy . . . because you have stretched your reach into the police.”

In 2019, Angwang completed and electronically submitted an SF-86C form for an U.S. Army background investigation. On the form, Angwang lied by denying that he had contacts with a foreign government or its consulate and by denying that he had close and continuing contacts with foreign nationals, including his family members who live in the PRC, some of whom were affiliated with the People’s Liberation Army.

“The defendant allegedly violated the trust of his community and the New York City Police Department on behalf of a foreign power, the People’s Republic of China. This type of conduct simply cannot be tolerated,”said Alan E. Kohler, Jr., Assistant Director of the FBI’s Counterintelligence Division. “This case serves as yet another reminder that China represents the biggest counterintelligence threat to the United States and that the FBI and our partners will be aggressive in investigating and stopping such activities within our nation.”

William F. Sweeny, the FBI Assistant Director-in-Charge of the New York Field Office, called the Angwang case a “the definition of an insider threat.” He said Angwang operated on behalf of a foreign government; lied to gain his clearance and used his position as an NYPD police officer to aid the Chinese government's subversive and illegal attempts to recruit intelligence sources.

“As alleged in this federal complaint, Baimadajie Angwang violated every oath he took in this country. One to the United States, another to the U.S. Army, and a third to this Police Department,” NYPD Commissioner Dermot F. Shea said.“From the earliest stages of this investigation, the NYPD’s Intelligence and Internal Affairs bureaus worked closely with the FBI’s Counterintelligence Division to make sure this individual would be brought to justice.”

If convicted, Angwang faces a maximum sentence of 55 years in prison.

FBI Director Christopher Wray, speaking at the Justice Department’s China Initiative Conference this past February at the Center for Strategic and International Studies in Washington, D.C., stated that one long-term threat to America’s information, intellectual property and economic vitality was espionage from China.

“China is using a wide range of methods and techniques — everything from cyber intrusions to corrupting trusted insiders. They’ve even engaged in physical theft,” Mr. Wray stated. “And they’ve pioneered an expansive approach to stealing innovation through a wide range of actors — including not just Chinese intelligence services but state-owned enterprises, ostensibly private companies, certain kinds of graduate students and researchers, and a variety of other actors all working on their behalf.”

Including, it appears, a New York cop.