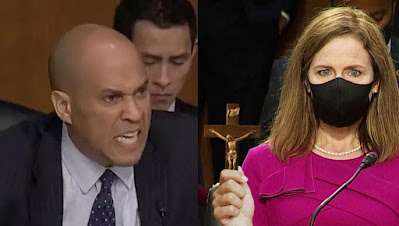 The Babylon Bee takes a satirical shot at the Barrett confirmation hearings.

WASHINGTON, D.C.—Amy Coney Barrett has eloquently defended herself through the Senate confirmation hearings this morning. But as Dems grew increasingly vicious, she was forced to turn to desperate measures.

After several hours of hearings, Barrett pulled out a large crucifix and held it aloft. A light shone from the heavens, and the Democrats knew they were defeated.

They shrunk back and began to hiss. "Noooo!" cried Senator Richard Blumenthal. "It burns us! Take it away!" He dove under his desk to hide from its light.

"Agggghhhh!!!" screamed Senator Cory Booker, his skin sizzling at the sight of Jesus on the cross. "I'll get you one day, Barrett!"