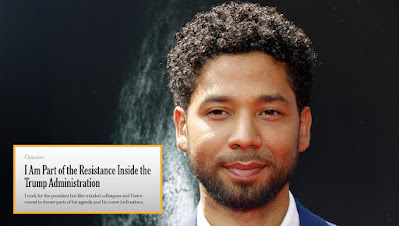 The Babylon Bee takes a satirical shot at the New York Times and the former “not quite senior official” in the Trump administration who wrote the “anonymous” Op-Ed two years ago.

WASHINGTON, D.C.—The White House official inside the Trump administration who penned an anonymous op-ed for The New York Times two years ago has been revealed as Hollywood actor Jussie Smollett.

"Mr. Smollett approached us with this anonymous report from inside the White House, and we felt we had a duty to relay his story to the American people," said a New York Times editor. "We still believe the characterization of Mr. Smollett as a senior, top-level, super-important official in the Trump administration was accurate."

"Every word of my op-ed was true," said Jussie. "From the part about Trump being a big meanie to the story about the White House janitors assaulting me and saying, 'This is MAGA country!', every single part of my account was accurate."