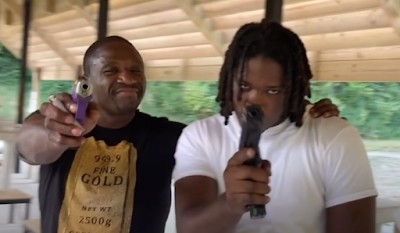 Ralph Cipriano at BigTrial.net offers his take on the “martyrdom” of a career criminal who was shot and killed by Philadelphia Police when he threatened them with a knife.

Before he was shot to death Monday by police, a knife-wielding Walter Wallace Jr. had at least three standing protection from abuse orders filed against him, by his mother and the mother of his children.

On March 3rd, Wallace was arrested for stabbing the mother of his children, Big Trial has previously reported. According to court records detailed in a new report by Mitch Blacher of NBC 10, the cops arrested Wallace in March after he told the mother of  his children, "I'll shoot you and that house up." But she decided against pressing domestic abuse charges, so District Attorney Larry Krasner charged Wallace with only making terroristic threats. And Wallace was turned loose after he plunked down a $1,000 deposit on $10,000 bail, while awaiting a trial that was continuously postponed during the pandemic.

Wallace's lengthy rap sheet includes a 2019 arrest for kicking the windows and door panels of a police vehicle. In 2016, during a robbery, Wallace allegedly grabbed a woman by the neck, and according to the victim, held a gun to her head. In 2013, he violated a protection order filed by his mother by throwing water in her face, punching her in the face, and threatening to shoot her, according to court records shown on air by Blacher and NBC 10.

This is the same guy The Philadelphia Inquirer mythologized today as a "family man" who had "many mental health crises and encounters with police." And it worked. Wallace was a mentally ill career criminal with some 18 arrests; an amateur rapper seen on video cavorting with guns that, as a convicted felon, he was barred from possessing, while rapping about "niggers" and "bitches."

And now, thanks to the Inquirer and the rest of the media, Wallace has been elevated in death to becoming an issue in the final days of the presidential campaign. Democratic presidential candidate Joe Biden and his running mate, Kamala Harris, announced yesterday that they reacted "with shock and grief" at the "emotional weight of learning about another Black life in America lost."

... The latest chapter of civil unrest in Philadelphia began on Monday, when cops were summoned on police radio to the 6100 block of Locust Street by a dispatcher who shared a "report of an 27 year old male assaulting an elderly female." It was the third police radio call of the day involving Wallace.

"Use caution," the cops were advised as they pulled up to Wallace's parents' house. "This is an ongoing domestic issue going on up there."

The shooting of Wallace set off two days of riots.