Tom Selleck Looks Back At His Sharpshooting Aussie Western, 'Quigley Down Under' 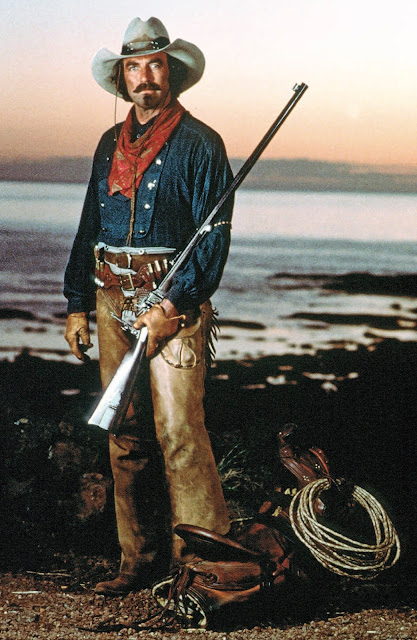 I enjoyed watching Tom Selleck in Magnum P, I. years ago, and I enjoy watching him in his current TV series Blue Bloods.

He’s an understated actor and a good actor, and by all accounts, he’s an intelligent and decent guy.

I’ve also enjoyed watching Tom Selleck in westerns, such as the TV miniseries The Sacketts and The Shadow Riders, both of which were adapted from Louie L’Amour’s western novels.

Cowboys & Indians magazine offers a look back at Tom Selleck’s other western, the 1990 film, Quigley Down Under.

Tom Selleck believes the 30th anniversary of his popular big-screen western Quigley Down Under is worth celebrating — and knew exactly how he wanted to do it.

“I called a guy who restores antique firearms and had him restore an 1878 Colt revolver,” Selleck says. That gun does not appear in the film, but Selleck thinks it’s the kind Quigley would have chosen. “If he owned a handgun, it would be a state-of-the-art double-action revolver — that’s why I picked it. Plus, I just love the old-time way it looks.”

Selleck displays the Colt in a case with a brass plaque that reads “I said I never had much use for one. Never said I didn’t know how to use it.”

That line, from the film’s audience-rousing climax, is etched in the memory of western fans who embraced the film in 1990, as well as those who have since discovered it through subsequent cable TV showings.