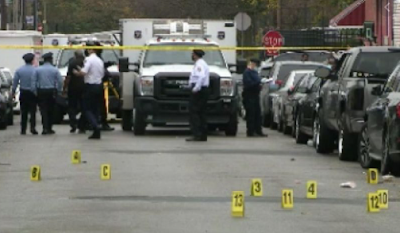 Ralph Cipriano at BigTrial.net. offers a piece on the rioting following the police shooting of a man who threatened the police with the knife, and on Philadelphia reaching 400 murders this year.

We interrupt the rioting, looting and requisite political pandering over the fatal police shooting yesterday of Walter Wallace Jr., a 27 year-old black man armed with a knife, to make an important announcement -- the city of Philadelphia just hit 400 murders!

Barry Torrance, a 44-year-old black man, was found shot in the head yesterday by his aunt on the 4800 block of Westminster Avenue in West Philadelphia. Ironically, the crime scene was just four blocks away from where the rioting and looting erupted on 52nd Street over the fatal police shooting of Walter Wallace Jr.

Torrance, who subsequently died of his wounds, became this year's 400th homicide. By comparison, as of Oct. 12th, New York City, with more than five times the population of Philadelphia, had only 362 murders.

In Philadelphia, there have been less than a dozen officer-involved shootings this year, but they sure get a lot of attention, especially when, as the case was yesterday, the victim involved is black, and the officers involved are white. Meanwhile, the city has 400 homicides on the books this year, as well as 132 suspicious deaths that may turn out to be homicides.

A conservative estimate of Philly's homicides this year is that at least 90%, of those victims, are black, as are the victims whose deaths have been classified as suspicious. But apparently when it comes to our current racial politics, those hundreds of black lives don't matter.

So the demonstrators who marched on the police station at 55th and Pine weren't chanting "Say his name" about Barry Torrence, Official Homicide Victim No. 400. No, instead, they were chanting about Walter Wallace Jr., a career criminal with 18 prior arrests, including domestic abuse and five assaults on cops.

During yesterday's riots and looting, while they were arresting more than 90 people, some 30 cops were injured. Twenty of those cops were released from hospitals after being treated for injuries caused by flying rocks, bricks and other projectiles. A 56-year-old female police sergeant who was struck by a pickup truck was admitted to a hospital for a broken leg.

But the emotional wounds inflicted on the cops by the demonstrators, as well as by the city's groveling progressive leaders, may be more lasting.

Video posted on Twitter showed demonstrators laughing and cursing as they tossed projectiles at Philly cops, who were reduced to running away to escape injury. Because of prior P.C. edicts by our woke mayor and police commissioner, the cops were barred from using tear gas on a couple hundred demonstrators who richly deserved it.

As one cop said, "We are the laughing stock of the world."

The police shooting of Walter Wallace Jr. took place on the 6100 block of Locust Street, where, shortly before 5 p.m., police were summoned by a report of a man with a weapon. The victim's mother tried to intercede and disarm her son, without success, before police wound up firing a fatal fusillade of 13 shots.

On video, Wallace, who was brandishing a knife, was told several times by two cops, as well as by bystanders, to drop the weapon. The two cops, who had their guns drawn, kept backing up and away from Wallace. But Wallace chased the two cops out in the street while holding the knife high and pointing it right at the cops. When Wallace kept advancing, the cops opened fire. Wallace wound up dead in a shooting that cops described as "textbook."

As many black conservatives have noted, there's a history of making black martyrs out of black criminals. Wallace fits the bill, with a rap sheet featuring 18 arrests, including incidents of domestic violence and five assaults on police.

Another legitimate question to ask the D.A.'s office is why Wallace was out on the street. His most recent arrest was on March 3rd, for terroristic threats. He was released the next day on $10,000 monetary bail, meaning he had to post only $1,000 to get out of jail.

Then, there's Wallace's rap sheet. In 2019, Wallace pleaded guilty to giving a false identification to law enforcement officers, but received no further penalty.

In 2017, Wallace was sentenced to 11 1/2 to 23 months and put on probation for five years after he was found guilty of robbery, simple assault and possession of an instrument of crime.

You get the idea.