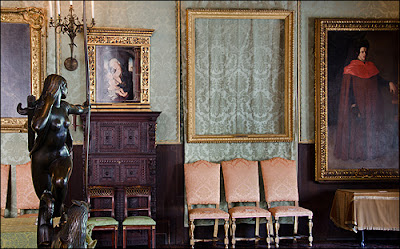 Milton J. Valencia at the Boston Globe reports on the sentencing of an alleged mobster linked to the Isabella Stewart Gardner Museum Heist (see the FBI.gov photo above).

HARTFORD – The alleged Mafia figure from Connecticut tied to the notorious Isabella Stewart Gardner museum heist was sentenced here in federal court today to 30 months in prison for possessing guns and ammunition and for selling prescription drugs.

Robert Gentile, 76, whose house was searched last year in relation to the Gardner investigation, has been in prison since his arrest in February 2012. He could be released in 10 months under federal prison guidelines. He would then have to serve three months of home confinement and a total of three years of supervised release.

Seated at the edge of his seat, the ailing Gentile made the sign of the cross as the sentence was announced. Gentile, who moments earlier had tearfully pleaded for mercy, responded, “Thank you your honor, thank you very much.”

His lawyer, A. Ryan McGuigan, later said he welcomed the sentence.

The sentence handed out by US District Judge Robert N. Chatigny was seen as being lenient for a mobster who has a history of crimes. Gentile had faced 46 to 57 months in prison under sentencing guidelines.

... Gentile, an alleged “made man” connected with the Philadelphia Mafia, has been linked to the late Robert Guarente, who has become a focus of investigation into the notorious Gardner heist – the largest property theft in US history.

You can also read an earlier post on the museum heist via the below link: