A Look Back At Mark Twain's Life On The Mississippi 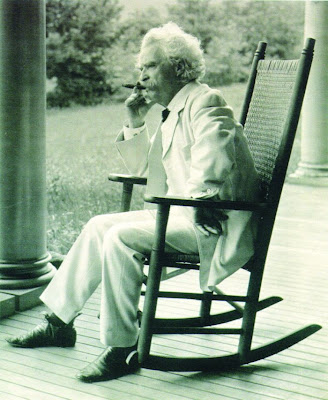 Steve King at the web site www.todayinliterature.com notes that on this day in 1883 Mark Twain's Life on the Mississippi was published.

Much of the book had been printed as a series of articles in The Atlantic eight years earlier. These reminiscences had been popular -- they "made the ice-water in my pitcher turn muddy," said William Dean Howells -- and Twain decided to expand them, seeing an opportunity to bring another high-volume subscription book to market. Because he would need to gather research, he also saw an opportunity to revisit the world of his youth after twenty-one years away, "to see the river again, and the steamboats, and such of the boys as might be left."

In his autobiography Twain says that his career as a river-boat pilot began in the mid-1850s: "I made up my mind that I would go to the head-waters of the Amazon and collect coca and trade in it and make a fortune.... When I got to New Orleans I inquired about ships leaving for Para and discovered that there weren't any and learned that there probably wouldn't be any during that century." He signed on as an apprentice with Horace Bixby, the pilot who had brought him to New Orleans; on the nostalgia and research trip of 1882, Twain arranged to travel upriver with Bixby. The riverbank was so different that when given a chance to pilot his old route Twain couldn't find any of his remembered landmarks. As a boy he would see a dozen steamboats an hour; now there were maybe a half-dozen a day -- one day he saw only one, though it was called "The Mark Twain." The end of his trip was a three-day stay in hometown Hannibal, Missouri; here he reports bursting into tears because of the changes, because of the familiar look and smell of the mud, because he was no longer Sam Clemens but Mark Twain, the famous author who now traveled with a secretary hired to take down notes so that no profitable impression might be lost.