The Best Of The Saint 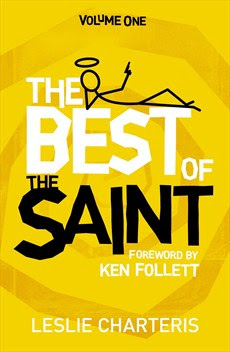 Allan Massie at the British newspaper the Telegraph offers a piece on the return of the "Saint," Leslie Charteris' fictional character.


Nostalgia, nostalgia, there’s nothing like nostalgia. This, or something like it, will be the reaction of many elderly , or indeed middle-aged, folk to the news that Hodder is bringing Simon Templar, alias “The Saint”, back to life, or at least back into print. Admittedly, the Saint was himself middle-aged, even if also ageless, when we first read him as schoolboys, or when Roger Moore played him with effortless charm on television.


He belongs to the Twenties, to the gentlemen-adventurers who went about biffing baddies and righting wrongs in light-hearted but also ruthless manner. There is a touch of Wodehouse’s Psmith in his persiflage, a touch too of Margery Allingham’s Albert Campion (at least as Campion appeared in Allingham’s early novels). But it is in the company of Sapper’s Bulldog Drummond and Dornford Yates’s Jonathan Mansel and Richard Chandos that he really belongs.

...The Saint is wholly preposterous; that is part of the charm. His creator, Leslie Charteris, must have known this but, at least in the early books, he delighted in his creation, and wrote with an infectious exuberance, often wittily.

You can read rest of the piece via the below link:

Hodder & Stoughton, publisher of The Best of the Saint, Volume 1, offers a a selection of the very best of the Saint stories from the early years and an introduced by Ken Follett.

'I am the Saint - you may have heard of me. Just a twentieth-century privateer. In my small way I try to put right a few of the things that are wrong with this cock-eyed world' Simon Templar, aka the Saint.

On the side of the law and yet outside it, the Saint, exciting, debonair and very slightly disreputable, lives for adventure. Here he is at his ebullient best, spreading terror among London's drug dealers, rescuing a lady crook from distress and much, much more.

Leslie Charteris was born in Singapore and moved to England in 1919. He left Cambridge University early when his first novel was accepted for publication. He wrote novels about the Saint throughout his life becoming, alongside Agatha Christie and Ian Fleming, one of the 20th century's most prolific and popular authors.

Note: I'm a fan of the Saint. Although I'm not fond of Roger Moore's portrayal of James Bond, I grew up in the 1960's watching Moore as the Saint on TV. I later saw the older films with George Sanders as the Saint and read the Leslie Charteris' novels.

Roger Moore and his son are producing a new TV series on the Saint with a young actor portraying Simon Templar. You can read about Moore and the new series via the below link:

http://www.pauldavisoncrime.com/2013/02/roger-moore-patron-saint-of-smooth.html
Posted by Paul Davis at 4:49 AM

Labels: Allan Massie, Hodder and Stoughton, Ken Follett, Roger Moore, Simon Templar, The Best of the Saint Volume one, The Saint, The Telegraph