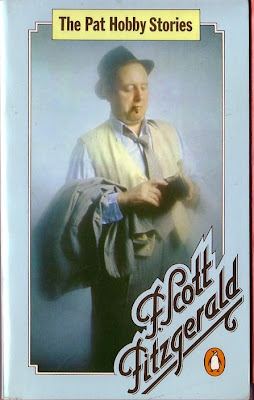 As May as been designated as National Short Story Month, and the late F. Scott Fitzgerald is in the news due to a new film version of his novel The Great Gatsby, I'd like to pass on a link to a piece on F. Scott Fitzgerald's Pat Hobby stories, as well as a link to the stories.

Andrew Turnbull wrote about the Pat Hobby character in 1962 for the New York Times.

Forty-nine, with red-rimmed eyes and a soft purr of whisky on his breath, Pat Hobby seemed less like a film writer than like an extra down on his luck, or like a bit player who specialized in the sort of father who should never come home. His jalopy was the property of the North Hollywood Finance and Loan Company; his Chesterfield came from the costume department of the studio where he sporadically worked; he was so impecunious that his two former wives has given up asking for alimony. He hadn't read a book in a decade and his daily newspaper was the racing sheet-- yet he was a film writer of sorts, a left-over from the good old silent days when he had miraculously earned up to $2,500 a week.

The talkies, with their increased demands on writers, had inaugurated his long decline; by 1940 he was lucky when he could wangle $250 a week for the "polish jobs" that were thrown his way in pity or contempt. Imaginatively sterile, he was skilled at making small changes in a collaborator's script ("crimson" to "red," "Get out of my sight!" to "Scram!"), so he could claim part credit for the final product. The rest of his ingenuity was reserved for blackmail, borrowing money and palming off other people's inspirations as his own. From our first glimpse of him we know he is doomed, that none of his machinations can possibly succeed. Yet there is fascination in watching him wriggle, and we come to admire his resilience, his infinite hope.  Fitzgerald created this anti-hero out of his own long and painful experience as a scriptwriter. On three occasions (between 1927 and 1937) he had been lured to Hollywood not simply by the large salary but by the artistic possibilities of the cinematic form. It seemed to him that the movies, with their "more glittering, grosser power," were stealing the fire of the novelist, and he longed to conquer the insurgent medium. All his scripts, however, had been rejected, or else rewritten to the point where he no longer recognized them as his own. His intricate, personal, evocative style was perhaps unsuited to the movies, and it wasn't his nature to "write down."  During the last two years of his life, when he was pinioned to Hollywood by financial necessity, he saw his dilemma for what it was-- that of the artist caught in a tough, materialistic enterprise-- and he turned it to fictional use. His tragic side went into Monroe Stahr, hero of "The Last Tycoon," while his comic spirit found release in Pat Hobby. Stahr became the embodiment of Fitzgerald's aspirations, Hobby of his degradations and humiliations.

And you can read the Pat Hobby stories online via the below link:

You can also read an earlier post on National Short Story Month via the below link: