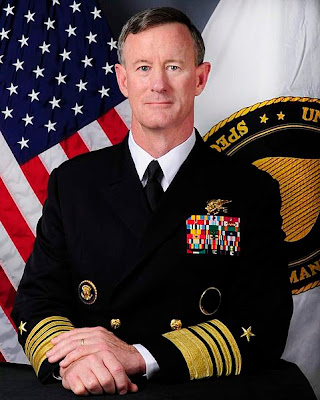 Donna Miles at the American Forces Press Service offers the below piece:

TAMPA, Fla., May 15, 2013 – Outlining his top priorities as he shapes U.S. Special Operations Command for the future, Navy Adm. William H. McRaven, the Socom commander, told a forum of special operators and defense contractors yesterday that it all starts with winning the current fight in Afghanistan.

“Every commander that is in my position realizes that you have to take care of the 25-meter target first. For us, that is Afghanistan,” McRaven told several hundred participants in the 2013 Special Operations Forces Industry Conference here.

“And I think we are making great strides in Afghanistan,” he said, citing the success of a new command structure that aligns various NATO and U.S. special operations forces under a two-star headquarters.

“We have pulled together the three components of the special operations forces that were in Afghanistan … under a single command,” McRaven explained. This includes the NATO component, Green Berets from Army Special Forces and Navy SEALs focused on building Afghan partnerships, and “the kinetic piece” that involves “capturing or killing bad guys,” McRaven said.

“And let me tell you, we are achieving in the [special operations forces] world probably the best result we have seen in many, many years in terms of synchronizing the effect on the ground on the battlefield by pulling together all three of the SOF components,” he said.

Asked by a reporter about Afghan allegations about misconduct by special operators -- which International Security Assistance Force officials have denied -- McRaven said it’s “easy and shortsighted” to view conditions on the ground through snapshots in time rather than over the long term.

“My perspective is 10 years of watching the development of Afghanistan,” he said. “And what I see is we now have incredible Afghan national security forces. We have a very credible Afghan [special operations force].”

McRaven noted the Afghans’ increasing role in military operations and their country’s security. “We don’t do anything today that the Afghan’s aren’t on the lead on,” he said. As a result, he reported better relations with the Afghan government, which he said had “concerns based on an American footprint forward.”

“Now that we have put the Afghans in the lead, we are getting less pushback from the government of Afghanistan. So we understand that,” McRaven said.

“We understand that Afghanistan is difficult,” he acknowledged. “It is complex, as they say. There are still problems with corruption. There are a lot of problems out there.”

But recalling 2003, when the Afghan capital of Kabul was “a war zone,” the admiral noted progress seen today. The roads are paved and street vendors are out in force, he said. Meanwhile, outside Kabul, an “incredible economic boom” is underway with new buildings rising from the ground.

“They have come a long way,” he said.