Joanne Chesimard, Convicted Murderer And Fugitive, Named To FBI Most Wanted Terrorist List, With $1 Million FBI Reward Offered For Information Leading To Her Capture And Return 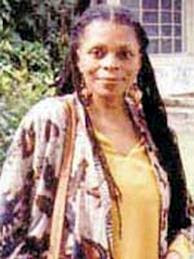 The FBI released the below information today:

Today, on the 40th anniversary of the cold-blooded murder of a New Jersey State Trooper, the fugitive convicted of the killing, Joanne Chesimard (seen in the above FBI photo), has been named a Most Wanted Terrorist by the FBI. Chesimard is the first woman ever to make the Bureau’s list of top terrorists. Aaron T. Ford, Special Agent in Charge of the FBI’s Newark Division, and Colonel Rick Fuentes, Superintendent of the New Jersey State Police, made the announcement this morning, noting that a reward of up to $1 million is being offered by the FBI for information leading to the capture and return of Chesimard.

Chesimard was an active, prominent member of the Black Panther Party and later the Black Liberation Army, which was described as one of the most violent militant organizations of 1970s. During this same time, the Black Liberation Army claimed responsibility for the murder of several police officers throughout the United States. On May 2, 1973, Chesimard and two accomplices were stopped on the New Jersey Turnpike by Troopers James Harper and Werner Foerster for a motor vehicle violation. All three subjects possessed fictitious identification, and, unbeknownst to the troopers, all three were armed with semi-automatic handguns. From the front passenger seat, Chesimard fired the first shot, wounding Trooper James Harper in the shoulder. As Harper moved for cover, Chesimard exited the car and continued to fire at both troopers until she was wounded by Harper’s return fire.

The rear seat passenger, James Coston, also fired at the troopers and was mortally wounded by Trooper Harper. Trooper Werner Foerster was engaged in a hand-to-hand combat with the vehicle’s driver, Clark Squire. Foerster was severely wounded in his right arm and abdomen and then executed with his own service weapon on the roadside. Chesimard’s jammed handgun was found at Foerster’s side.

The three assailants returned to their car and drove down the road approximately five miles before abandoning the vehicle. Within half an hour, Chesimard was arrested by New Jersey State Troopers. Coston was found to have died near their vehicle, and Squire was found 40 hours later within a mile of their car.

Chesimard and Squire were charged, convicted, and sentenced for the murder of Trooper Werner Foerster, as well as on additional charges. Squire remains in jail. In 1979, Chesimard escaped with help from a coalition of radical, domestic terror groups who took two guards hostage during an armed assault at the facility where she was being lodged. She later fled to Cuba. Since this time, she has been classified as a federal fugitive and the subject of an unlawful flight to avoid confinement warrant.

Now known as Assata Shakur, the 65-year-old Chesimard is believed to be living freely in Cuba. She has been living in Cuba since mid-1984, where she attends government functions and her standard of living is higher than most Cubans.

“Joanne Chesimard is a domestic terrorist who murdered a law enforcement officer execution-style,” said Aaron T. Ford, Special Agent in Charge of the FBI’s Newark Division. “Today, on the anniversary of Trooper Werner Foerster’s death, we want the public to know that we will not rest until this fugitive is brought to justice.”

“Justice has no expiration date, and our resolve to capture Joanne Chesimard does not diminish with the passage of time. Instead, it grows ever stronger with the knowledge that this killer continues to live free,” said Attorney General Chiesa. “We honor Trooper Foerster, a true hero, by keeping the focus on this fugitive, and we hope that this augmented reward will spur action that will bring Chesimard back to face the justice she has evaded for far too long.”

Assistant Special Agent in Charge Eric D. Welling of the FBI’s Newark Division, who heads the Joint Terrorism Task Force; U.S. Marshal Juan Mattos, Jr.; and other law enforcement representatives were at today’s event to lend their critical support to this fugitive investigation.

Individuals with information concerning Joanne Chesimard are asked to contact the FBI’s tip line at 1-800-CALL-FBI. Information can also be provided to the nearest FBI field office, American Embassy, or Consulate. A tip can also be submitted electronically at https://tips.fbi.gov.
Chesimard’s Most Wanted Terrorist poster has been prepared in English and Spanish and can be viewed at http:/www.fbi.gov/wanted/terrorists.

Note: You can watch a video clip on Joanne Chesimard via the below link: