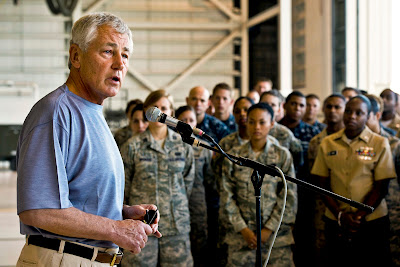 Karen Parrish at the American Forces Press Service offers the below piece:


Hagel stopped in Hawaii on the first leg of a trip that also will take him to Singapore and Brussels, Belgium. The secretary stood in a hangar at Joint Base Pearl Harbor-Hickam with an F-22 Raptor fighter jet behind him and about 200 service members in front, representing the Army, Navy, Air Force, Marines, National Guard and Coast Guard.
*
Hagel thanked the troops for their service, offered a few remarks and took their questions, one of which centered on cybersecurity. The secretary noted cyber is "one of the very few items" pegged to receive more money in the current budget request now before Congress.

"Cyber warfare capabilities: we are increasing that part of the budget significantly," he said, noting that means the department can devote more people and more sophisticated approaches to defending U.S. networks and information.

Hagel said interconnected cyber efforts across government also will grow. U.S law enforcement agencies, the National Security Agency, U.S. Cyber Command and the Department of Homeland Security all work together on the issue, he noted. He added that allied contributions also are key to the fight.

Cyberattacks are a fundamentally different threat because, with no shots fired, they potentially can disrupt utilities, banking, business and military networks, yet remain essentially untraceable to a country or an agent of origin, the secretary noted.

"Cyber is one of those quiet, deadly, insidious unknowns you can't see," Hagel added. "It's in the ether -- it's not one big navy sailing into a port, or one big army crossing a border, or squadrons of fighter planes. ... This is a very difficult, but real and dangerous, threat. There is no higher priority for our country than this issue."

Note: The above DoD photo of Hagel addressing the troops was taken by Erin A. Kirk-Cuomo.
Posted by Paul Davis at 10:53 PM