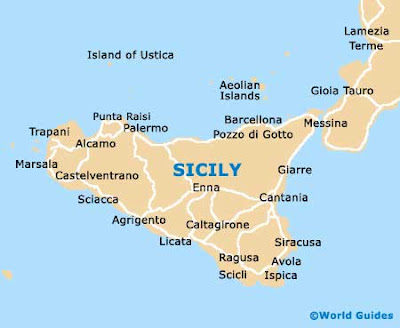 Nick Pisa at the British newspaper the Daily Mail offers a piece on the murder of Canadian mobsters in Sicily.

Italian police fear a trans-Atlantic Mafia war after the charred and bullet ridden bodies of two Canadian gangsters were found on the Mediterranean island of Sicily.

Convicted killer and mob enforcer Juan Ramon Fernadez Paz, nicknamed Joe Bravo, was discovered along with his associate Fernando Pimentel after an anonymous tip off to police.

Investigators said they were 'riddled with at least 30 bullet wounds' and an attempt had been made to burn their bodies following the hit. One senior police source said: 'The hit was ordered from Canada. Paz was the main target and Pimentel was probably killed because he was with him at the time. The fear now is that there could be more blood letting.'

The bodies were discovered in the hamlet of Casteldaccia, near the city of Palermo, on the Mafia's stronghold of Sicily.