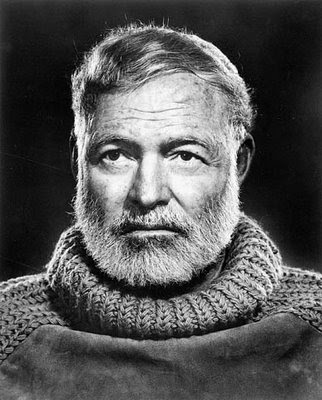 Paul Hendrickson, the author of Hemingway's Boat, a good book on Hemingway's life, offers a review of Hemigway's audiobook library for the New York Times.

In a foreshortened life that didn’t make 62, Ernest Hemingway got a lot down on paper. If, by his middle and later years, enough of it seemed self-­parodying and sometimes even mawkish, great swaths of it remain immortal — and not just the early work, as some critics would claim. Hemingway changed the look and sound of American speech on the printed page. But how did he get so much work done, the stories, the novels, the nonfiction (not to mention the thousands of letters he wrote), amid all that wasteful boozing and boasting, the depressions, the freakish accidents, the bouts of soaring blood pressure, the stark-awake and Seconal-stoked nights?

And this is not even to dwell on all the time he devoted to indulging his passions for fishing and hunting. That is how we think of him when we squint and say his name: mythic life of action in the natural world. While that part of Hemingway is not untrue, it’s also the case that he was a far more tormented and sickly soul, both physically and emotionally, than we ever really guessed. In a way, he was a far more indoor soul as well. A man “wears a mask, and his face grows to fit it,” George Orwell wrote.


One answer to the riddle of how so many words were set down, in spite of everything, is that Hemingway kept struggling — I’d call it heroically — no matter where he was or what ailed him, to find his way to his writing table. The movable space could be on his fishing cruiser in the Gulf Stream, or in a hotel room in Spain while bombardments were going on outside the window, or under the mosquito netting of a sleeping tent in Africa.
You can read the rest of the review via the below link:
http://www.nytimes.com/2013/05/19/books/review/the-ernest-hemingway-audiobook-library.html?pagewanted=all&_r=0
You can also read an earlier post on Paul Hendrickson's Hemingway's Boat via the below link:
http://www.pauldavisoncrime.com/2012/11/hemingways-book-idea-began-on-seaplane.html
Posted by Paul Davis at 1:35 PM