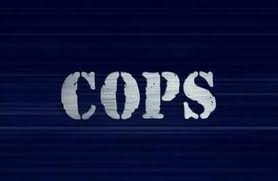 A piece in Philly.com reports on the TV reality show Cops moving from Fox, where it aired for 25 years, to Spike.

NEW YORK - The "bad boys" are on the move. The Saturday night television fixture "Cops" is leaving Fox after 25 years and will be shown on the Spike network.

The cable network aimed at young male viewers said it will begin airing the action documentary series with the indelible theme song ("bad boys, bad boys, whatcha gonna do when they come for you?") in September.

The move isn't really a surprise. Fox had cut down on the number of episodes ordered this season and frequently pre-empted the show for football games or ultimate fighting matches, which drew higher ratings. Fox will announce its fall season schedule next week.

"All good things must come to an end and there's a renewal process in life," said John Langley, the show's creator. "I'm fortunate I have the opportunity to take it to Spike."

You can also read an earlier post on Cops and link to a piece about my night out with Philly cops doing drug raids via the below link:

http://www.pauldavisoncrime.com/2012/11/bad-boys-bad-boys-cops-makes-crime-pay.html
Posted by Paul Davis at 7:23 AM