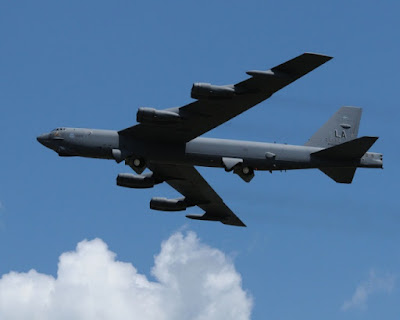 
WASHINGTON, April 26, 2016 — The latest in military technology and the addition of up to 450 more U.S. troops announced yesterday will enhance the U.S.-led coalition’s efforts to enable ground forces in the campaign to defeat Islamic State of Iraq and the Levant terrorism in Iraq and Syria, the deputy commander for operations and intelligence for Operation Inherent Resolve told Pentagon reporters today.
Air Force Maj. Gen. Peter E. Gersten, who’s responsible for planning, coordinating, synchronizing and executing Inherent Resolve combat operations in Iraq and Syria, briefed the media from Baghdad via teleconference on recent campaign momentum against ISIL.
The additional troops being sent to support the effort will advise and assist Iraqi and Syrian counter-ISIL ground forces “to continue to fracture and degrade the enemy,” Gersten said.
Latest Technology Enhances Campaign


The accelerated campaign to defeat ISIL now includes B-52 bombers, additional cyber capabilities and the Army’s High-Mobility Artillery Rocket System, Gersten said.
With the recent addition of the B-52 Stratofortress to the coalition air campaign’s arsenal, it is important to clear up any “misperceptions” surrounding the  bomber’s capabilities, he said, noting that today’s B-52 has more capabilities than B-52 bombers used during 1960s and 1970s.
The new Stratofortress is “a highly upgraded B-52 [with] an extraordinary platform that strikes with the same accuracy and precision that every other coalition asset has struck in the recent past,” he said.
Gersten emphasized that “a lot of discussion” surrounds the approval process for airstrike operations in a combat zone. “As the general officer responsible for synchronizing all combat operations in this theater, I can assure you that we do everything possible to mitigate the loss of civilian life and minimize collateral damage as we engage this enemy,” he said.


Cyber Capabilities in Combat
At the very high end of the combat operations spectrum, the coalition has begun to use its “exquisite cyber capabilities” in the fight against ISIL” the general said. Cyber is a standing capability, he added, and is “just another precision arrow in our arsenal, aimed directly at the heart of the … enemy.”
HIMARS to Counter ISIL
Two separate Army High-Mobility Artillery Rocket Systems -- also known as HIMARS -- will be used in Turkey to support counter-ISIL operations in Syria, while the second will support Iraq’s counter operations, Gersten said. As a mobile and “very agile” system, he added, it will be exactly where the military needs it to be at any given time. It will work in combination with coalition air assets, he said.
The coalition is working closely with its strong Turkish partners on HIMARS operations, the general said. “The HIMARS is simply one of many systems the coalition is bringing to fight this enemy,” he added. “We have fighters, we have remotely piloted aircraft, we have cyber, and now we have HIMARS.”
The U.S.-led coalition will “bring everything to bear against this enemy, wherever it presents itself,” Gersten said.
Note: The above Air Force photo shows the B-52 Stratofortress in flight.
Posted by Paul Davis at 8:25 PM