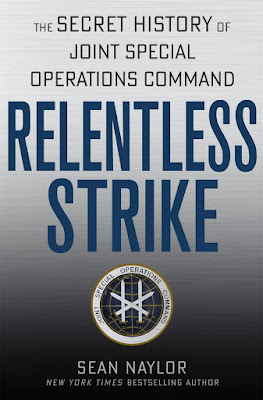 
Forget the high-level Washington blather about troop levels and anti-terrorist strategy in the Middle East. Oblivious to such nonproductive chatter, a fighting force unique to the American military experience is waging a war that relies heavily upon deadly deception.
Unlike Vietnam, no public body counts are made. There are occasional headlines, to be sure — for instance, the killing of the Islamic State’s No. 2 man in late March by covert operatives, and the elimination of Osama bin Laden. But as should be true in shadow warfare, the least said the better. In essence, lethal operations with a small or nonexistent U.S. footprint.
Such is the message delivered by military writer Sean Naylor in a must-read book about the overseer of this secret army, formally the Joint Special Operations Command (jay-sock, in military-speak). The command brings together elements of the Army, Navy and Air Force, augmented by CIA operatives — men and women of exceptional skills who are bold enough to make decisions on their own, and execute them with deadly force.
Mr. Naylor’s section on origins and organization of JSOC is a jumble of names the recitation of which will be of scant interest to most readers. To obscure JSOC’s role in the shadow war, operational units change names frequently. For instance, a Navy unit named Task Force Sword in due course becomes Task Force 11. One outfit was dubbed “Army of Northern Virginia,” with a nod to Gen. Robert E. Lee.
The meat of the book consists of examples of the ingenuity JSOC fighters employ against the enemy. What is striking is that many of the tricks were developed by field operatives who devised new innovate ways to dispose of enemies.
A prime example: A JSOC unit recruited Iraqis — code-named Mohawks — to conduct intelligence operations which required the ability to blend in with the population. In one operation, a Mohawk would enter an Internet cafe known to be popular with suspect terrorists and upload software on the computer. That employed a keystroke recognition system that enabled monitors to read messages. Some softwear “would covertly activate a webcam if the computer had one, allowing the task force to positively identify a target.”
Once a target was identified, the message would go out: The subject was “at cafe 6 at computer 4, go get him.” Other operatives would “track the insurgent far enough away from the cafe to minimize the chance of enemies figuring out how the Americans had located the target,” who would be snatched off the street.
You can read the rest of the review via the below link:

http://www.washingtontimes.com/news/2016/apr/11/book-review-relentless-strike-the-secret-history-o/
Posted by Paul Davis at 2:20 AM