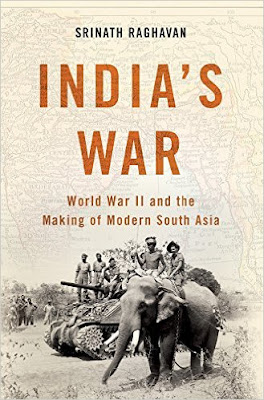 
In September 1939, the British viceroy of India, Lord Linlithgow, made a stunning radio announcement: the British Empire, including India, was now at war with Germany — a decision made without consultation with any Indian leader. Thus commenced a two-front struggle — one against the Axis powers, the other with Indian nationalists who felt, as Srinath Raghavan writes, “If Britain was truly fighting for democracy, then it should logically forsake its own empire and introduce full democracy toIndia.”
Such was not to be until 1947. In the interim, the British attitude toward Indian independence was sardonically expressed by Winston Churchill in an “after-dinner joke” in the 1930s — that the often-jailed nationalist leader Mahatma Gandhi “should be bound hand and foot at the gates of Delhi and trampled upon by a huge elephant ridden by the viceroy.”
Nationalists such as Gandhi and Jawaharlal Nehru bedeviled Britain throughout the war, even going to jail for opposing their countrymen fighting. Gandhi even claimed in 1942 that the United States should have stayed out of the war, that it was “a partner in Britain’s guilt.”
But the vast majority of Indians chose to join the British fight against Germany and Japan. By war’s end, India had trained and deployed some 2.5 million men, “the largest volunteer army in history,” Mr. Raghavan writes. Nearly 90,000 were killed or maimed. The populace clearly did not wish to exchange rule by the British to subjugation to the Japanese.
You can read the rest of the review via the below link:
http://www.washingtontimes.com/news/2016/apr/17/book-review-inidas-war-world-war-ii-and-the-making/
Posted by Paul Davis at 1:58 PM