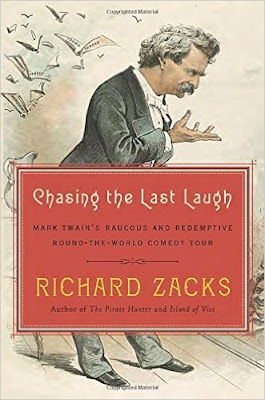 Richard Zacks, author of Chasing the Last Laugh: Mark Twain's Raucous and Redemptive Around-the-World Tour, offers a piece from the book at the Daily Beast.


Celebrity perks usually amount to a few comped bottles of champagne or courtside tickets. A British railway once set aside 35 miles of mountain track in the Himalayas forMark Twain to use as a private roller coaster ride. Six-seater car, a handbrake and a long way down if the car jumped the edge. (He expected it would.) He shared that opinion with his wife and daughter just as they boarded.
In 1895/1896, in a mostly forgotten trip, Mark Twain traveled around the world, performing 90 minutes of stand-up in 71 different cities, across the United States and the fading British Empire, in Australia, New Zealand, India, Southern Africa. He spent almost 100 days at sea and 50 days sick in bed.
This most American of authors rode an elephant in India, at a palace owned by one of the ten wealthiest men in the world, the “Gaikwar of Baroda.” (Twain loved the exotic names: the “Nizam of Hyderabad,” the “Nawab of Mysore.”) “I took a ride; but it was by request—I did not ask for it, and didn’t want it; but I took it, because otherwise they would have thought I was afraid, which I was.” The elephant’s gold ankle hoops and jewel-encrusted howdah were worth more than Twain’s entire savings at the time, which then amounted to nothing; the author of Huckleberry Finn and Tom Sawyer was traveling around the world to pay off huge debts from failed business ventures.
You can read the rest of the piece via the below link: