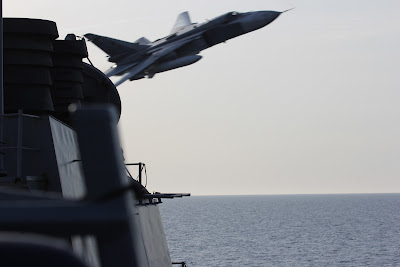 The U.S. Navy release the above photo of a Russian Su-24 attack aircraft making a very low pass by the USS Donald Cook, an Arleigh Burke-class guided-missile destroyer forward deployed by Rota, Spain.

The Cook was conducting a routine patrol in the U.S. 6th Fleet area of operations in the Baltic Sea in support of U.S. national security interests in Europe.

Note: Do the Russians know the Cook has missiles that can take out enemy aircraft?