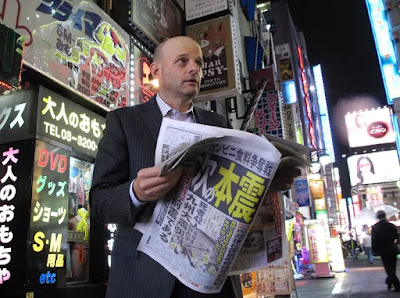 Anna Fifield at the Washington Post offers a piece on the American who is covering crime news in Japan.


TOKYO — Gangsters, the sex trade, gruesome murders, adult videos, body discoveries, suicides, police up to no good. These are the core things Brett Bull looks for after hours.
Not to participate, of course, but to write them up.
The 47-year-old Californian is an engineer in Tokyo by day, Tokyo Reporter by night. Bull has created a site that, as its tagline says, delivers “salacious news on crime and culture.” Think of a hybrid of the National Enquirer, the New York Post and Penthouse. Online. In Japan.
There is the recent story about the Buddhist monk charged with murdering a nail artist. And the one about the playboy antics of a limbless author who was being considered as a political candidate by Prime Minister Shinzo Abe’s party. Not to mention the piece about the husband who used garden shears to cut off the penis of a man he suspected was fooling around with his wife (and then flushed it down the toilet).
“Japan is supposed to be a safe country. But based on what I read, I really don’t know that’s true,” said Bull, sitting in a bar in Kabukicho, the heart of seedy Tokyo, not far from his office.
You can read the rest of the piece via the below link: