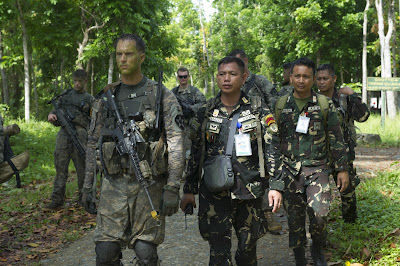 JAMINDAN, Philippines, April 22, 2016 — At the break of dawn, a Philippine army platoon and one U.S. Army platoon from 2nd Battalion, 3rd Infantry Regiment, geared-up on Antique Airfield to conduct the final mission of Operation Handa Koa, part of this year’s Balikatan exercise.

The team of soldiers boarded two CH-47 Chinook and four UH-60 Black Hawk helicopters to launch an air assault. Together, they trekked through the jungle to reach their main objective, code-named "Rhino".

"We started off with a combined-joint amphibious assault on the island itself, and then a Marine air assault onto Antique Airfield. The combined Marines then took control of the airfield expand the lodgment, and conducted a defense," said Army Capt. James Hodges, 25th Infantry Division assistant operations officer.

The first phase of the operation began on the island of Luzon, which included numerous days of planning and synchronization at Camp Emilio Aguinaldo. A combined-joint U.S. and Philippine forces team then worked together to project assets from Luzon to conduct a large-scale operation on the island of Panay.

"As we transitioned out of the initial projection phase-down to our initial staging base, it gave us the opportunity to do final rehearsals here on the airfield and then understand a little more about the operational environment that we were going to go into specifically to the island of Panay, and then conduct the air assault today on the objective," said Army Lt. Col. Jared Bordwell, Task Force Patriot commander.

"The initial phase back at Magsaysay is when we started to understand each other and gain that appreciation for capabilities as well as form that camaraderie between the two forces," Bordwell said. "An infantryman is an infantryman. So the [Philippine soldiers] and their capabilities and our capabilities -- as we understood each other a little bit more -- they meshed very well with actions on the objective. It was just like having two U.S. platoons or having two [Philippine] platoons out there. Both company commanders did an incredible job of planning, synchronizing, and really enabling that communication during the actions on to facilitate the execution of the mission."

By training together, the U.S. and Philippine soldiers developed tactics, techniques, procedures, and built partnerships.

"I think Balikatan was a great opportunity for my soldiers and myself to learn a lot about the Philippines, understand our partner here, and understand some of the unique challenges of the operational environment," Bordwell said. "I think it’s also a great teaching tool as we continue our partnership in the Pacific in the future, and more likely than not soldiers will be back here doing Balikatan or other operations. It’s a great partnership and a great ability for us to learn from our partners as well hopefully teach them some capabilities, and refine some of their overall abilities."


This year marked the 32nd iteration of the annual Balikatan exercise. The U.S. and the Philippines have a continued interest in strengthening their longstanding security alliance, which has provided a platform for security and stability in the region throughout the decades.
Posted by Paul Davis at 8:59 AM