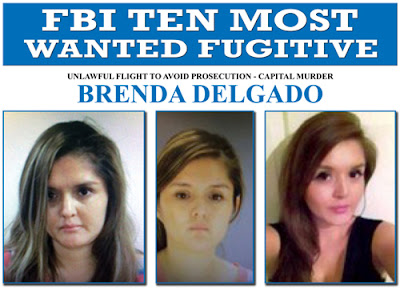 The FBI Dallas Division released the below information:


Brenda Delgado, wanted for allegedly orchestrating the murder-for-hire of dentist Kendra Hatcher in Dallas, Texas, was taken into custody without incident today in Torreón, Coahuila, Mexico, by agents of the Mexican Attorney General’s Office (PGR), Criminal Investigations Agency (AIC.) Delgado was placed on the FBI’s Ten Most Wanted Fugitives list on April 6, 2016. Delgado will remain in custody pending extradition proceedings.
“The FBI is extremely appreciative of our law enforcement partners in Mexico, as well as our local, state, and federal partners, for their tremendous cooperation and collaboration in the capture of Top Ten Fugitive Brenda Delgado,” said Thomas M. Class, Sr., Special Agent in Charge of the FBI’s Dallas Field Office.
On September 2, 2015, Dr. Kendra Hatcher was found deceased from a gunshot wound in the parking garage of her apartment complex. Based on the investigative efforts by the Dallas Police Department, Delgado is suspected of hiring two alleged co-conspirators to facilitate the murder. Both co-conspirators have been arrested and are currently in custody. Delgado has been charged with Capital Murder for her alleged crime.
The search for Delgado was coordinated by the Dallas FBI’s Violent Crimes Task Force, which is comprised of FBI special agents and detectives from the Dallas and Garland Police Departments.
Delgado was the 506th person and the ninth woman to be placed on the FBI’s Ten Most Wanted Fugitives list, which was established in March of 1950. Additional information concerning Delgado and the FBI’s list of Ten Most Wanted Fugitives, can be found by visiting the FBI’s Internet home page at www.fbi.gov.
Posted by Paul Davis at 12:35 PM