On This Day In History: In 1774 Benjamin Franklin Published A Satirical “Open Letter to Lord North” 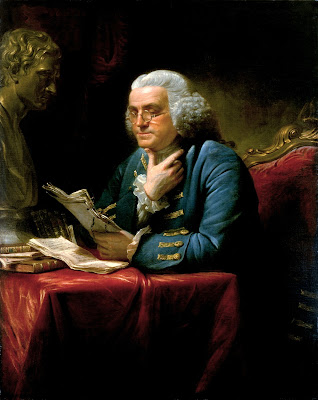 As History.com notes, on this day in 1774 Benjamin Franklin wrote a satirical letter to the British prime minister.

On this day in 1774, Benjamin Franklin writes an open letter to Great Britain’s prime minister, Frederick, Lord North, from the Smyrna Coffee House in London. It was published in The Public Advertiser, a British newspaper, on April 15, 1774. Franklin’s tongue-in-cheek letter suggested that the British impose martial law upon the colonies and appoint a “King’s Viceroy of all North America.” Franklin satirically went on to suggest that such centralized power over “Yankee Doodles,” who had “degenerated to such a Degree” from their British ancestors, “that one born in Britain is equal to twenty Americans,” would allow the crown to collect its taxes, then sell their impoverished colonies and colonists to Spain.
You can read the rest of the piece via the below link:
http://www.history.com/this-day-in-history/benjamin-franklin-publishes-an-open-letter-to-lord-north?cmpid=email-hist-tdih-2016-0405-04052016&om_rid=de5e4076c942a595dbda53f758321d197499484f6d117f61b6ac5c08e0d6f0aa&om_mid=35585218&kx_EmailCampaignID=3810&kx_EmailCampaignName=email-hist-tdih-2016-0405-04052016&kx_EmailRecipientID=de5e4076c942a595dbda53f758321d197499484f6d117f61b6ac5c08e0d6f0aa
Posted by Paul Davis at 3:00 PM