‘Prisoner Of Hope: Lyndon B. Johnson, The Great Society And The Limits Of Liberalism’ 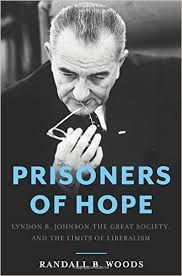 Veteran journalist and author Joseph C. Goulden offers a good review in the Washington Times of Randall B. Woods' Prisoner of Hope: Lyndon B. Johnson, the Great Society and the Limits of Liberalism


The ill-disguised contempt with which much of post-Kennedy Washingtonviewed President Lyndon Johnson was on nasty display on election night in 1964, after LBJ routed Barry Goldwater. Art Buchwald, the Washington Post columnist, sneered at a cocktail party, “We were nice to this fellow when he was running against Goldwater because we were scared of Goldwater, but now we’re going to get him because he’s just a Texas clown!”
Buchwald was perhaps piqued because the “clown,” in his first months in the White House, achieved passage of a civil rights act for which JFK had struggled ineffectively for almost three years — a measure guaranteeing blacks equal access to public facilities and employment, among other benefits.
Further, Johnson’s early success was a prelude to a period of so-called “Great Society” legislation that was tantamount to a second New Deal. Although many conservatives viewed Johnson’s social programs with scorn, he overcame a Congress dominated by Southerners (Democrats, in the main) with legislative adeptness equaled by no other American president. Johnson combined persuasion with occasional brute force to achieve what he wished.
The reasons that many of his programs fell short of the intended achievements — “the unintended consequences of well-intentioned policy” — is the theme of Randall B. Woods’ account. A professor at the University of Arkansas, and an early LBJ biographer, Mr. Woods is both incisive and objective in appraising the origins of Johnson’s Great Society programs, and their fate.
You can read the rest of the review via the below link:

Labels: American history, Joseph C. Goulden, Prisoners of Hope Lyndon B. Johnson the Great Society and the Limits of Liberalism, Randall B. Woods, The Washington Times