Norfolk, Virginia Is A Hotbed For Espionage Cases Involving The Navy 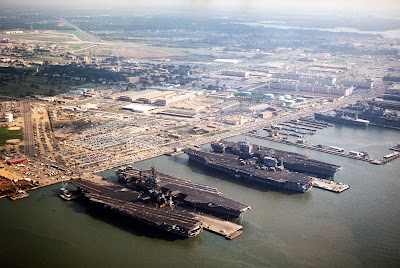 I was stationed at the U.S. naval base in Norfolk, Virginia for a couple months in 1974 while I was waiting for orders to a Navy tugboat at the nuclear submarine base at Holy Loch, Scotland.

So I was interested in reading a piece by Brock Vergakis at the Virginian-Pilot on how Norfolk was a hotbed for espionage cases involving the Navy.


Navy espionage cases are rare, but when they do occur, Norfolk often plays a starring role.
A Taiwanese-born officer is the third sailor in the past decade to be charged with espionage or attempted espionage by the Navy, with both previous cases resulting in convictions in a military courtroom in Norfolk, according to the service.
Civilians also have been convicted recently in Norfolk of attempted espionage. Last year, an engineer who stole plans for the future aircraft carrier USS Gerald R. Ford with the intention of giving them to Egyptian spies was sentenced to 11 years. In 2014, a former petty officer first class and submariner was sentenced to 30 years for giving "Top Secret" information to undercover FBI agents posing as Russian intelligence officers.
While espionage is investigated by U.S. agencies around the globe, the extensive military presence in Hampton Roads provides ample opportunities for would-be spies. One of the biggest security breaches in the nation's history occurred when a Norfolk-based sailor began selling secrets to the Soviet Union in 1967, but wasn't arrested until 1985. That spy, John Walker Jr., died in prison in 2014.
You can read the rest of the piece via the below link:

You can also read an earlier post on the current Navy spy case via the below link:

Note: The above aerial photo of the naval base at Norfolk, Virginia was released by the U.S. Navy.
Posted by Paul Davis at 12:02 PM