Heyday: The 1850s And The Dawn Of The Global Age 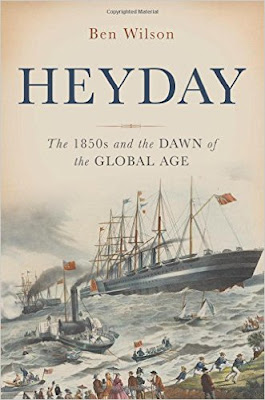 Veteran journalist and author Joseph C. Goulden offers a good review in the Washington Times of Ben Wilson's Heyday: The 1850s and the Dawn of the Global Age.


Two long afternoon immersions in Ben Wilson’s book left me feeling as if I had been on a high-speed roller coaster, rocketing from the gold fields of Australia and California to the financial houses of London, battlefields in Central America and the steppes of the Caucasus and telegraph offices sprinkled over the continent.
The young historian (born in 1980) touches these locales, and many more, in depicting the 1850s as a significant decade in world history. And he skillfully melds seeming disparate happenings — a global jigsaw, if you will — into a narrative that is both convincing and entertainingly readable.
The driving force was interconnectivity of communications and travel — the transoceanic telegraph, railroads, express mail streamers and clippers, even news agencies. The undersea telegraph was made possible by development of gutta-percha, a hard and flexible latex to coat cables, insulating them from salt water. Once the telegraph came into use, Mr. Wilson notes, “events in one place reverberated around the planet with unprecedented celerity.”
The 1850s saw mass population shifts, with millions of persons finding new lives elsewhere; the overall global economy expanded an estimated five-fold.
You can read the rest of the review via the below link: