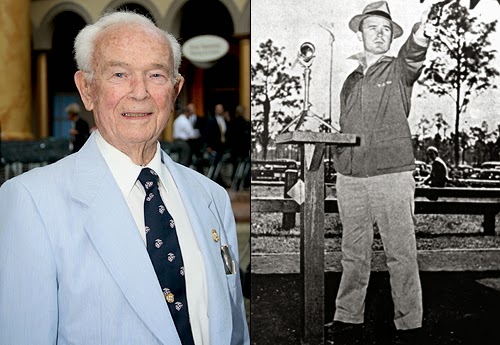 The FBI web site offers a piece on the life of the late Walter Walsh, a former U.S. Marine and FBI special agent.

As an FBI agent, he battled gangsters like Arthur “Doc” Barker and Alfred Brady. As a U.S. Marine, he fought valiantly in the Pacific Theater during WWII. As an expert marksman, he won numerous honors throughout his life, including competing on the U.S. Olympic shooting team in the 1948 London Summer Games.

His life consisted of tales both harrowing and heroic. And it is with a heavy heart that the FBI pays its respects to the storied Walter Walsh, who passed away earlier this week at his Virginia home. He would have celebrated his 107th birthday this Sunday.

http://www.fbi.gov/news/news_blog/celebrating-the-life-of-walter-walsh?utm_campaign=email-Daily&utm_medium=email&utm_source=extras&utm_content=319112
Posted by Paul Davis at 5:29 AM