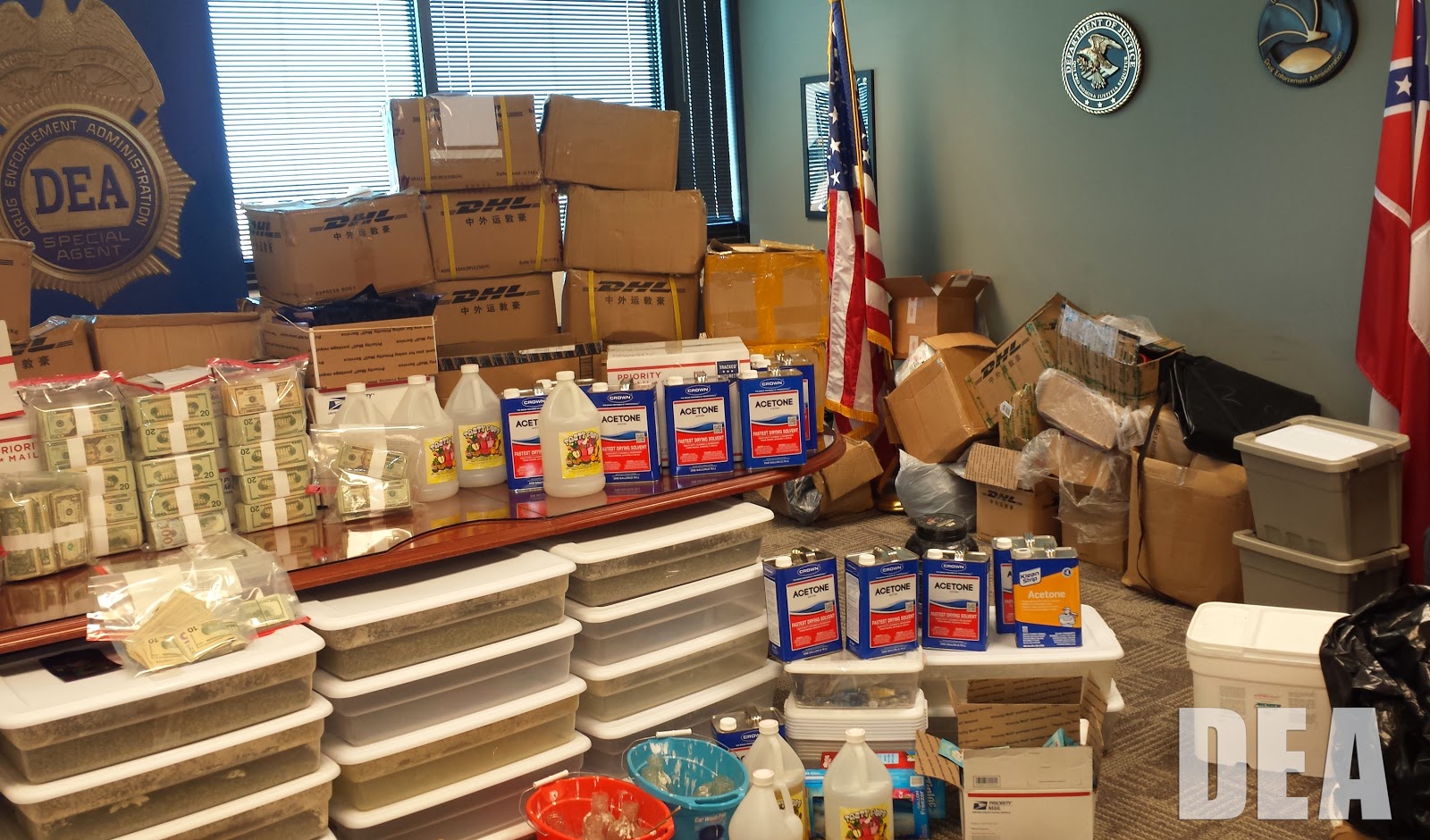 The DEA released the below information yesterday:

MAY 07 (WASHINGTON) – The Drug Enforcement Administration (DEA), Customs and Border Protection (CBP), Immigration and Customs Enforcement Homeland Security Investigations (HSI), Federal Bureau of Investigation (FBI), Internal Revenue Service (IRS) and other federal, state, and local partners announced the culmination of Project Synergy Phase II, an ongoing effort targeting every level of the dangerous global synthetic designer drug market. Since January and leading up to early this morning, nationwide enforcement operations have taken place targeting these drug trafficking organizations that have operated in communities across the country.

The second phase of the Project Synergy, which began January 2014, culminated this morning in 29 states, involves more than 45 DEA offices serving nearly 200 search warrants.  As of today, more than 150 individuals have been arrested and federal, state and local law enforcement authorities have seized hundreds of thousands of individually packaged, ready-to-sell synthetic drugs as well as hundreds of kilograms of raw synthetic products to make thousands more.  Additionally, more than $20 million in cash and assets were seized.  These numbers are expected to grow as investigations continue.

In addition to targeting retailers, wholesalers, and manufacturers, many of these investigations continued to uncover the massive flow of drug-related proceeds to countries in the Middle East, including Yemen, Jordan, Syria, and Lebanon, and as well as other countries.  Investigations also targeted many trade implements such as organic leaves and packaging material used in preparation for drug re-sale and distribution. These facilitators are key players in this ever-changing designer drug industry.

Communities, families, and individuals across the United States have experienced the scourge of designer synthetic drugs, which are often marketed as herbal incense, bath salts, jewelry cleaner, or plant food. These dangerous drugs have caused significant abuse, addiction, overdoses, and emergency room visits. Those who have abused synthetic drugs have suffered vomiting, anxiety, agitation, irritability, seizures, hallucinations, tachycardia, elevated blood pressure, and loss of consciousness. They have caused significant organ damage as well as overdose deaths. Over the past five years, DEA has identified between 200 and 300 new designers drugs from eight different structural classes, the vast majority of which are manufactured in China.

“Many who manufacture, distribute and sell these dangerous synthetic drugs found out first hand today that DEA will target, find and prosecute those who have committed these crimes,” said DEA Administrator Michele M. Leonhart. “The success of Project Synergy II could not have been possible without the assistance of our state, local and foreign law enforcement partners.  We stand united in our commitment to aggressively pursue criminals who are all too willing to experiment on our children and young adults.”

“Tragically, people die every day at the hands of illegal designer drugs," said ICE Deputy Director Daniel Ragsdale, “Through operations like this, we strike a blow to drug dealers and continue an important national conversation about the dangers associated with drug use.”

“This is another example of the partnership between CBP, HSI, and DEA to share information and participate in joint efforts to keep synthetic drugs out of the country, off the streets, and out of our communities,” said CBP Commissioner R. Gil Kerlikowske. “The specialized expertise of our CBP officers as well as the unique capabilities of CBP scientists play a vital role in contributing to the seizure and identification of these potentially deadly substances at the border.”

The first phase of Project Synergy began in December of 2012, and resulted in more than 227 arrests and 416 search warrants served in 35 states, 49 cities and five countries, along with more than $60 million in cash and assets seized.   Altogether, 9,445 kilograms of individually packaged, ready-to-sell synthetic drugs, 299 kilograms of cathinone drugs (the falsely labeled “bath salts”), 1,252 kilograms of synthetic cannabinoid drugs (used to make the so-called “fake pot” or herbal incense products), and 783 kilograms of treated plant material were seized.

As was the case in the June 2013 culmination of the first phase of Project Synergy, CBP’s National Targeting Center played a significant role in the continued success of this initiative. As part of this effort, CBP was responsible for identifying and targeting high-risk express consignment shipments suspected of containing synthetic drugs. One of the keys to the success of Project Synergy is the cooperation between CBP and DEA, who routinely share information and intelligence with each other and other partners such as DHS-HSI to strengthen and further these investigations. (see B-roll video link below)

Chemists and other scientists from DEA’s Office of Forensic Science, as well as CBP scientists across the country, were instrumental in identifying synthetic drugs and compounds designed to circumvent U.S. controlled substance classifications.  The identifying of these compounds allowed investigators and prosecutors to quickly act during the course of these investigations. As a result of these cooperative efforts between DEA and CBP through the Special Operations Division, CBP has seized over 3,000 kilograms of illicit designer drugs.  Intelligence has also been shared with other nations such as Australia and other international partners, who have in turn seized hundreds of kilograms of illicit designer substances such as cannabinoids, cathinones and GHB.

Smokable herbal blends marketed as being “legal” and providing a marijuana-like high have become increasingly popular, particularly among teens and young adults, because they are easily available and they are more potent and dangerous than marijuana.  These products can take a variety of forms, including as plant material that has been treated with dangerous psychoactive compounds that mimic THC, the active ingredient in marijuana. Synthetic cannabinoids are sold at a variety of retail outlets, in head shops and over the Internet.   Brands such as “Spice,” “K2,” “Blaze,” and “Red X Dawn” are labeled as incense to mask their intended purpose. In 2012, the Substance Abuse and Mental Health Services Administration (SAMHSA) reported 11,406 emergency department visits involving a synthetic cannabinoid product during 2010. In a 2013 report, SAMHSA reported the number of emergency department visits in 2011 involving a synthetic cannabinoid product had increased 2.5 times to 28,531.

For the past several years, there has also been a growing use of, and interest in, a variety of synthetic substances, including synthetic cathinones (stimulants/hallucinogens) sold under the guise of “bath salts” or “plant food.” Marketed under names such as “Ivory Wave,” “Purple Wave,” “Vanilla Sky,” or “Bliss,” these products are comprised of a class of dangerous substances perceived to mimic cocaine, LSD, MDMA, and/or methamphetamine. Users have reported impaired perception, reduced motor control, disorientation, extreme paranoia, and violent episodes. The long-term physical and psychological effects of use are unknown but potentially severe. The American Association of Poison Control Centers reported 2,656 calls related to synthetic cathinone (“bath salts”) exposures in 2012 and overdose deaths have been reported as well.

These products have become increasingly popular, particularly among teens and young adults and those who mistakenly believe they can bypass the drug testing protocols of employers and government agencies to protect public safety.  They are sold at a variety of retail outlets, in head shops, and over the Internet. However, they have not been approved by the Food and Drug Administration (FDA) for human consumption or for medical use, and there is no oversight of the manufacturing process.

While many of the designer drugs being marketed today that were seized as part of Project Synergy are not specifically prohibited in the Controlled Substances Act (CSA), the Controlled Substance Analogue Enforcement Act of 1986 (CSAEA) allows many of these drugs to be treated as controlled substances if they are proven to be chemically and/or pharmacologically similar to a Schedule I or Schedule II controlled substance.  Synthetic drug cases prosecuted under this analogue provision have grown steadily in recent years as this problem has evolved. It has proven to be an effective tool to combat these new and emerging designer drugs.

DEA has used its emergency scheduling authority to combat both synthetic cathinones (the so-called “bath salts” with names like Ivory Wave, etc.) and synthetic cannabinoids (the so-called incense products like K2, Spice, etc.), temporarily placing several of these dangerous chemicals into Schedule I of the CSA. Congress has also acted, permanently placing 26 substances into Schedule I of the CSA in 2012.

More information about synthetic designer drugs can be found on the Drug Fact Sheets at http://www.deadiversion.usdoj.gov/drug_chem_info/index.html
Posted by Paul Davis at 3:01 PM