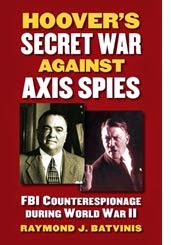 An oft-told story in the annals of intelligence is that of the rivalry of the FBI's J. Edgar Hoover with William Donovan of the Office of Strategic Services over which agency should have wartime primacy in the fight against the Axis powers. However, an overlooked principal in the fight was none other than MI6, the British Secret Intelligence Service.

As retired FBI executive Raymond Batvinis relates in engrossing detail, the Brits chose to align themselves with Donovan, realizing that he had considerably more clout with President Roosevelt than did Hoover. Indeed, in the pre-war years, the British were bold enough to set up their own shadow intelligence service in the United States, British Security Coordination, whose functions paralleled those of the FBI in many respects. To the British, the FBI was a police agency, interested in imprisoning spies rather than using them to feed disinformation back to Berlin, as did MI6.
In due course, peace was made. The OSS emerged with prime responsibility for foreign intelligence, but the FBI had an overseas presence through agents posted to American embassies as “legal attaches.”

Drawing upon previously classified documents, Mr. Batvinis describes how the FBI joined with MI6 in the so-called “Double Cross” operation to funnel false information back to the enemy through agents who were caught and “turned.” The bureau’s target audience was Japan, which was fed a flood of bogus “information” on subjects ranging from the growth of U.S. military prowess to intended invasion targets. I had not encountered a full description of the bureau’s work on “Double Cross” until Mr. Batvinis'  book.

Joseph C. Goulden also reviews Matthew Cecil's Hoover's FBI and the Fourth Estate: The Campaign to Control the Press and the Bureau's Image.

From the same publisher, but not nearly so impressive, is Matthew Cecil’s book on Hoover and the media. Put directly, it is an ill-disguised hatchet job that reveals the author to be either ill-informed or duplicitous.

http://www.washingtontimes.com/news/2014/may/27/book-review-hoovers-spies-and-his-detractors/?page=all#pagebreak
Posted by Paul Davis at 11:37 AM