"Goldfinger" Is Still The Gold-Standard Bond 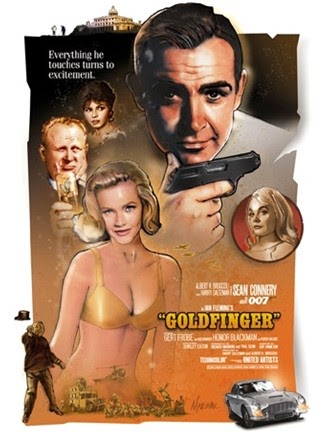 Ed Symkus at the Boston Globe looks back at the classic James Bond film Goldfinger.

First there was “Dr. No.” The 1962 big-screen introduction to the popular Ian Fleming character Bond, James Bond, cost $900,000, and pulled in $60 million at the box office. A year later, “From Russia With Love” had twice the budget and earned almost $80 million. These straightforward, action-packed spy films starring the relatively unknown Scottish actor Sean Connery and featuring lots of guns and gals were surprise hits. But no one was ready for the explosion that came with the late-1964 release of “Goldfinger,” which made household names of Connery, Aston Martin, the fictional characters Oddjob and Pussy Galore, and plucked the journeyman German actor Gert Frobe from obscurity when he landed the title role of Bond’s nemesis.

The film was made for $3 million and raked in $125 million — a true blockbuster. Yet now, with 24 Bond films produced, and an as-yet untitled 25th set for release in November 2015, “Goldfinger” still remains the gold standard for many aficionados. It gets a local screening at the Brattle Theatre on May 31 in honor of its 50th anniversary, though purists will remember that the film wasn’t released in the United States until December of ’64.
Why has the film remained so popular for five decades? Maybe because, along with those guns and gals, there was the addition of gadgets. Possibly also because a snarky sense of humor was added (after electrocuting a Mexican assassin in a bathtub, Bond utters his first one-liner, actually a one-worder: “Shocking”). And probably because everything about the film, from humor to action to exotic locales to sophisticated characters and an entertaining story line, happened to line up perfectly.

Note: Ed Symkus is wrong about Bond uttering his first one-liner in Goldfinger.

In Dr No Bond kills one of the evil doctor's henchmen and places him in the back seat of his convertible. Bond drives to Government house, gets out and tells a policeman at the entrance to watch the stiff in the backseat. "Make sure he doesn't get away." The policeman does a double-take.

In From Russia With Love Bond and Kerim are watching a movie billboard with a large photo of Anita Ekberg when the killer Krilencu slips out a trapdoor hatch from Ekberg's mouth and slides down a robe. Bond shoots and kills him with a sniper's rifle. He then says, "She should have kept her mouth shut." I recall the first time I watched the film in the theater. The audience roared.
Posted by Paul Davis at 8:00 PM