Jack Bauer is Back And Kicking Major Ass 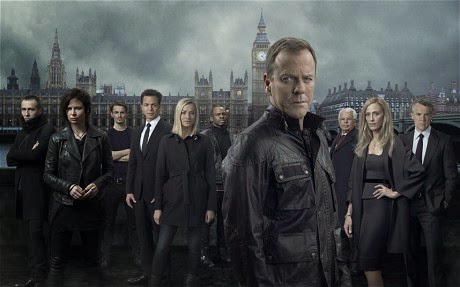 It’s the beginning of May, and it feels like the television season is starting all over again. Here’s why: Jack Bauer is back Monday night at 8 p.m. for the two-hour premiere of “24: Live Another Day.”

As a fugitive who’s been hiding out in Eastern Europe after killing Russian diplomats, Jack (a tightly coiled Kiefer Sutherland) is now a wanted man. But does that stop him from storming CIA headquarters in London to rescue someone near and dear to him? Hardly.

The action starts immediately with CIA agent Erik Ritter (Gbenga Akinnagbe, “The Wire”) and his associates strolling through East London toward an abandoned factory while, on the show’s characteristic split screen, headquarters receives information that a “high-value suspect” is nearby.

Guess who that might be? In no time, Jack is kicking major butt and reminding us why he is one of TV’s greatest action stars.

“24: Live Another Day” has the kind of heart-stopping suspense that makes it impossible to look away to tweet.