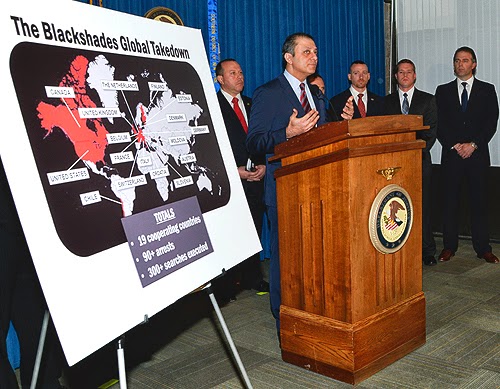 Yesterday Preet Bharara (seen in the above FBI photo), the U.S. Attorney for the Southern District of New York, released the below statement:

Today, representatives from the FBI New York Field Office and the U.S. Attorney’s Office for the Southern District of New York announced the results of a cyber takedown, which included the unsealing of an indictment against Swedish national Alex Yucel and the guilty plea of U.S. citizen Michael Hogue, both of whom we believe co-developed a particularly insidious computer malware known as Blackshades. This software was sold and distributed to thousands of people in more than 100 countries and has been used to infect more than half a million computers worldwide.

Also charged and arrested in the U.S. were an individual who helped market and sell the malware and two Blackshades users who bought the malware and then unleashed it upon unsuspecting computer users, surreptitiously installing it on their hardware. So far during the takedown, 40 FBI field offices have conducted approximately 100 interviews, executed more than 100 e-mail and physical search warrants, and seized more than 1,900 domains used by Blackshades users to control victims’ computers.

You can read the rest of the statement via the below link: