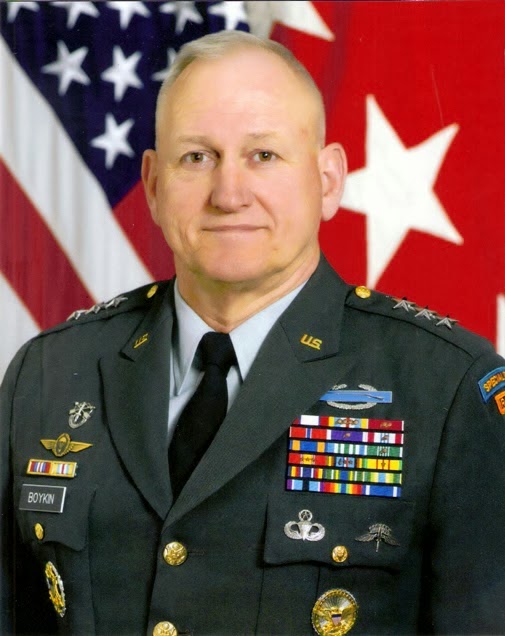 Dan Lamothe at the Washington Post offers a piece on the reprimand issued to retired Lt. General William Boykin over his 2008 book.

WASHINGTON — When retired Lt. Gen. William "Jerry" Boykin, the former commander of the U.S. Army's elite and secretive Delta Force, published a book in 2008, it detailed some of the Pentagon's most sensitive operations of the 20th century. Among them were the 1979 hostage crisis in Iran and the tragically flawed 1993 mission in Somalia that killed 18 U.S. troops and was later depicted in the book and movie "Black Hawk Down."

Retired military personnel who write about such sensitive issues commonly submit their works to the Pentagon for advance review to ensure that they don't divulge classified information. But Boykin declined to do so, forging ahead with publication of "Never Surrender: A Soldier's Journey to the Crossroads of Faith and Freedom."

The Army struck back last year, quietly issuing him a scathing reprimand following a criminal investigation that concluded he had wrongfully released classified information, according to an Army document obtained by The Washington Post through a Freedom of Information Act request.

The reprimand is the latest in a series of embarrassing incidents in which senior military officers have faced scrutiny for alleged wrongdoing.

But Boykin says it's not so simple in his case. The Defense Department first launched an investigation into his book shortly after it was published and determined in 2010 that he had not released any classified information, he said. The Army then reopened the investigation about two years later, after he publicly voiced objections to several Pentagon policies, including the ongoing integration of women into more jobs in the military, he said.

You can read the rest of the piece via the link to stripes.com below:

You can also read my Counterterrorism magazine interview with General Boykin via the below link: