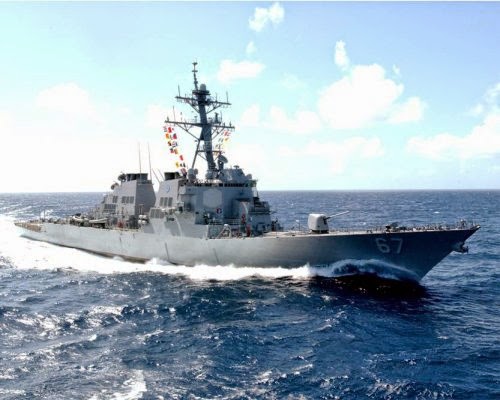 Frank Rosario and Bruce Golding at the New York Post offer a piece on the USS Cole in New York for Fleet Week.

The USS Cole triumphantly cruised into New York for Fleet Week on Wednesday — staging a symbolic victory over terrorism on the same day the new Sept. 11 museum opened to the public.

The guided-missile destroyer was the target of a deadly attack in 2000 that marked the rise of al Qaeda less than a year before the terror group toppled the Twin Towers.

It will be open to the public from 8 a.m. to 5 p.m. through Memorial Day at the former Navy Home Port off Front Street in Staten Island. Admission is free.

“All of the sailors are happy that we are here just in time for the 9/11 memorial,” said US Navy Ensign Hannah Taylor, 22.

“Sailors and New Yorkers alike will be able to pay tribute to the people of New York and everyone who died in the 9/11 attacks.

“Just having the opportunity to showcase our unity as one nation is a blessing,” she added.

You can also read my Counterterrorism magazine interview with the commanding officer of the USS Cole when it was attacked, retired Commander Kirk S. Lippold, via the below link:

Note: The above U.S. Navy photo shows the USS Cole at sea.
Posted by Paul Davis at 8:04 AM