First SEALs: A Look Back At The WWII OSS Maritime Unit 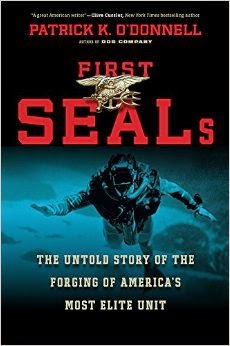 Patrick K. O'Donnell, author of First SEALs: The Untold Story of the Forging of America's Most Elite Unit, offers a piece on the World War II OSS Maritime Unit in National Review.

Today, the Navy SEALs are the stuff of Hollywood legend: The last two years alone have seen them featured in both Zero Dark Thirty and American Sniper. But few people know the history of America’s first swim commando teams.


It all began with a kick in the ass. On the night of December 19, 1941, a 709-ton Auda-class Italian submarine surfaced in Alexandria Harbor, and six Italian frogmen mounted three miniature submersibles that contained massive warheads. Clad in wetsuits and wearing breathing devices, they each received a ceremonial kick in the backside from their commanding officer, Prince Junio Valerio Scipione Borghese, as they exited the submarine. Later called “The Black Prince,” Borghese was the leader of Decima MAS, an Italian special-operations unit that included these underwater swim commandos.

Invisible from the surface, these men entered the home of the British fleet in the Eastern Mediterranean and detonated their warheads, sinking two British battleships and a tanker. As a result of their daring attack, the balance of maritime power in that part of the world shifted, setting off an underwater arms race. Other nations rushed to develop their own capabilities and the means to support them.

The United States was perhaps the farthest behind when the need for this capability became apparent. In 1942, America didn’t have special-operations units. To solve that problem, the U.S. government turned to its Office of Strategic Services, or OSS. At the time, no technology for underwater combat swimming existed in a military-operational form in the American arsenal. The OSS Maritime Unit (MU) would have to develop it and the teams needed to use it, overnight — with a whopping budget of $500.

You can read my Counterterrorism magazine piece on how the Underwater Demolition Team frogmen contributed to the forming of the modern Navy SEALs via the below link: