The King Kong Of The Thriller: The Phenomenal Output Of Edgar Wallace, Once The World’s Most Popular Author 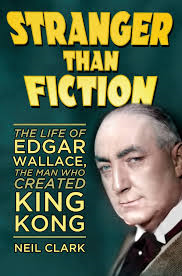 Michael Moorcock at The Spectator offers a piece on a new book about the late thriller writer Edgar Wallace.

At the time of his death in 1932 Edgar Wallace had published some 200 books, 25 plays, 45 collections of short stories, several volumes of verse, countless newspaper and magazine articles, movie scripts, radio plays and more. His work was dictated, transcribed and sent directly to the publisher. In one year alone (1929) he wrote a dozen books. People joked about getting ‘the weekly Wallace’.

Despite their speed of creation, Wallace’s stories were, said The Spectator, written in plain, clear English and ‘read by everyone, from bishops to barmen’. His influence on the thriller genre was extensive, profound and continuous. He inspired a thousand imitators with The Four Just Men, Mr J.G. Reeder, Sanders of the River and Educated Evans. He wrote humour and thrillers, SF and reportage. With instincts for a good publicity stunt, he created a brand image: long cigarette holder, stetson, jodhpurs, riding boots.

A quarter of the English public read his books. One of his many publishers alone sold 30 million copies. He led an extravagant life, gambled heavily, bought race-horses and stood for Parliament. His generosity was famous. At his death he owed millions. His enormous debts were settled in a couple of years.

http://www.spectator.co.uk/books/9424761/the-king-kong-of-the-thriller-the-phenomenal-output-of-edgar-wallace-once-the-worlds-most-popular-author/
Posted by Paul Davis at 1:16 AM