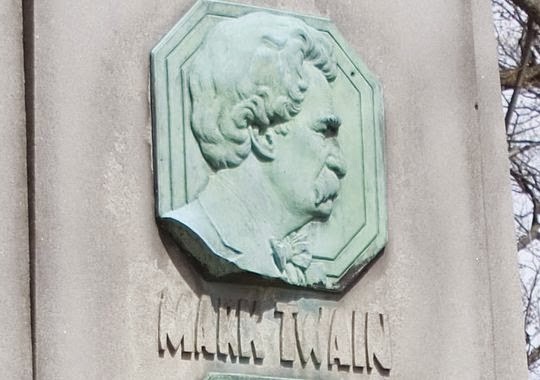 G. Jeffrey Aaron at stargazette.com reports on the theft of Mark Twain likeness at his gravesite.

Elmira City Police and the administrator of Woodlawn Cemetery are searching for the person who removed the bronze likeness of Mark Twain from his gravesite in the Elmira cemetery.

Cemetery Superintendent Bryce Cuyle said someone who was visiting Twain's gravesite over the holiday weekend left a voicemail on the cemetery office's telephone saying the plaque was missing from the 12-foot high granite monument that commemorates both Twain and his son-in-law Ossip Gabrilowitsch.

Gabrilowitsch was the conductor of the Detroit Symphony Orchestra and husband of Twain's daughter, Clara. His likeness is also attached to the monument stone, but only Twain's profile was taken.

"I don't believe it was taken for its scrap value because it's a specialty item that will be recognized around here," said Cuyle. "I think it was taken because of who it was."