The FBI's New Most Wanted Terrorist 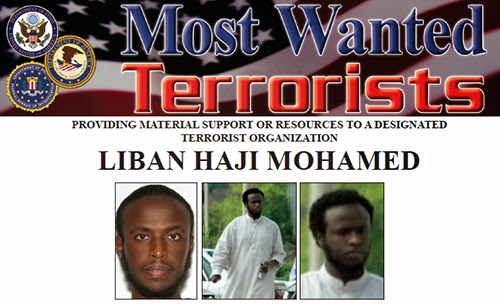 The FBI announced that a naturalized U.S. citizen born in Somalia was added to FBI Most Wanted Terrorists List.

Liban Haji Mohamed, a naturalized U.S. citizen born in Somalia, has been named to the FBI’s list of Most Wanted Terrorists, and a reward of up to $50,000 is being offered for information leading to his arrest and conviction. Mohamed is charged with providing material support and resources to al Qaeda and al Shabaab, a Somali-based terrorist organization.

“Al Shabaab has claimed responsibility for many bombings in Somalia and Uganda and the 2013 attack on the Westgate Mall in Nairobi, Kenya,” said Carl Ghattas, special agent in charge of the Counterterrorism Division at the FBI’s Washington Field Office. “Liban Mohamed is believed to have left the U.S. with the intent to join al Shabaab in East Africa. We believe he is currently there operating on behalf of that terrorist organization.”

You can read the rest of the piece and watch a video about the wanted terrorist via the below link: