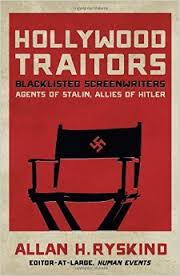 Wes Vernon at the Washington Times offers a review of Allan H. Ryskind's book on the Communists in Hollywood.

At last. After more than a half-century there is now available a book that thoroughly discredits all the movie industry protestations that there were no Communists in filmmaking during and after World War II, when in fact there were hundreds.

Here is irrefutable evidence that they were very adept at using the screen to pound pro-Soviet propaganda into the heads of unsuspecting Americans in theaters coast-to-coast.

The more than 500 pages of “Hollywood Traitors; Blacklisted Screenwriters — Agents of Stalin, Allies of Hitler” expose in detail and with infinite documentation the pro-Soviet propaganda machine, including during the 22 months when Stalin and Hitler were allies.

This long-overdue book is authored by Allan H. Ryskind, who grew up in Hollywood, and whose father was Morrie Ryskind, lyricist, writer of stage and screen productions, including scripts for the comedic Marx Brothers.

The elder Ryskind, a staunch anti-communist, was a cooperative “friendly” witness before the House Committee on Un-American Activities (HUAC), which held years of hearings probing communism in Hollywood. For decades, Hollywood has struck back by using its control of large segments of the motion picture and TV industries to smear the reputations of those who had exposed them.

Today, the younger Mr. Ryskind, author of the new volume (and now editor-at-large for the 70-year-old Washington weekly Human Events), has given us specifics as to how the talents of screenwriters and others in Hollywood were deployed in the service of America’s enemies.