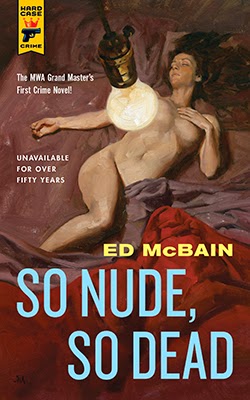 When I was a teenager I read and enjoyed Ed McBain's 87th Precinct crime novels, as well as his other crime novels, such as A Matter of Conviction. That novel about New York street gangs was made into one of my favorite films from the 1960s, The Young Savages, which starred Burt Lancaster and Telly Salvalas.

I also read his literary novels, such as The Blackboard Jungle, written under his name Evan Hunter, which he legally changed from his name at birth, Salvatore Lombino.

So I was pleased to learn that Hard Case Crime has announced that they are publishing two lost novels by the late great crime writer. (I love Hard Case Crime's book covers).

You can read the Hard Case Crime announcement below:


New York, NY; London, UK (January 21, 2015) – Hard Case Crime, the award-winning line of pulp-styled crime novels from editor Charles Ardai and publisher Titan Books, will publish two lost novels by best-selling crime novelist Ed McBain, creator of the legendary “87th Precinct” series and recipient of the Mystery Writers of America’s prestigious Grand Master Award. Both books were originally published in the 1950s under other names (neither was ever credited to Ed McBain), and both have been unavailable for more than 50 years.

SO NUDE, SO DEAD was McBain’s first crime novel and tells the story of a piano prodigy turned heroin addict who wakes up in a seedy hotel room to find his companion of the night before – a beautiful singer and fellow addict – murdered in bed beside him. On the run from the police and growing desperate for a fix, he has to find the real killer or face a date with the electric chair. 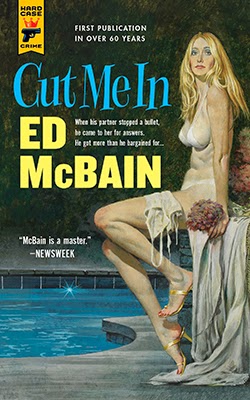 CUT ME IN is the story of a New York literary agent who is forced to play private detective when his widely loathed, philandering partner is shot to death in his office. Was the killer one of the women the dead man was sleeping with? Or was the motive for his murder tied up with the contract for a lucrative television deal that’s missing from the office safe…? The book offers a dark and sexy crime story mixed with a pull-no-punches satire of the Manhattan business world in the pre-MAD MEN era, informed by McBain’s own personal experiences working in an ethically dubious literary agency early in his career.

Hard Case Crime will publish SO NUDE, SO DEAD July 14, 2015, with a brand new cover painting in the classic pulp style by award-winning illustrator Gregory Manchess. The same month, Hard Case Crime will also re-issue its one previous McBain title, THE GUTTER AND THE GRAVE, for the first time ever in trade paperback format. CUT ME IN is scheduled for a January 12, 2016 publication and will feature a new cover by legendary painter Robert McGinnis. 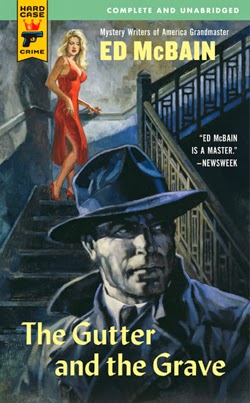 As a special bonus, each of the three books will also include a long-lost private-eye novelette by McBain starring Matt Cordell, the detective from THE GUTTER AND THE GRAVE. These three novelettes were originally published in pulp magazines of the 1950s and haven’t been seen in more than half a century.

“We were fortunate to get to work with Ed McBain at the very end of his life on THE GUTTER AND THE GRAVE, and we’ve been looking for a way to bring readers more of his work ever since,” said Charles Ardai. “We were thrilled to discover these terrific early works, which essentially no one alive today has ever read. It’s like having two new McBain novels – a huge treat for his millions of fans.” 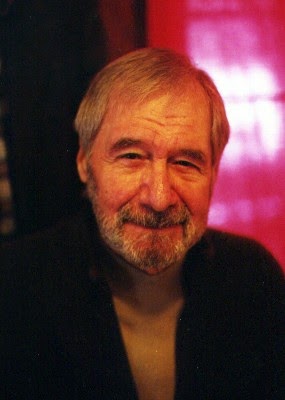 Called “the best new American publisher to appear in the last decade” by Neal Pollack in The Stranger, Hard Case Crime has been nominated for and/or won numerous honors since its inception including the Edgar, the Shamus, the Anthony, the Barry, and the Spinetingler Award.  The series’ books have been adapted for television and film, with two features currently in development at Universal Pictures, a TV series based on Max Allan Collins’ Quarry novels in development by Cinemax, and the TV series Haven in its fifth season on SyFy.  Recent Hard Case Crime titles include Stephen King’s #1 New York Times bestseller, Joyland; James M. Cain’s lost final novel, The Cocktail Waitress; a series of eight lost novels written by Michael Crichton under the pseudonym “John Lange”; and Brainquake, the final novel of writer/filmmaker Samuel Fuller. Hard Case Crime is published through a collaboration between Winterfall LLC and Titan Publishing Group. www.hardcasecrime.com

Titan Publishing Group is an independently owned publishing company, established in 1981, comprising three divisions: Titan Books, Titan Magazines/Comics and Titan Merchandise.  Titan Books, nominated as Independent Publisher of the Year 2011, has a rapidly growing fiction list encompassing original fiction and reissues, primarily in the areas of science fiction, fantasy, horror, steampunk and crime. Recent crime and thriller acquisitions include Mickey Spillane and Max Allan Collins’ all-new Mike Hammer novels, the Matt Helm series by Donald Hamilton, and the entire backlist of the Queen of Spy Writers, Helen MacInnes.  Titan Books also has an extensive line of media- and pop culture-related non-fiction, graphic novels, and art and music books. The company is based at offices in London, but operates worldwide, with sales and distribution in the U.S. and Canada being handled by Random House.  www.titanbooks.com
Posted by Paul Davis at 8:11 PM