There is No Substitue For American Power: Spy General Unloads On Obama 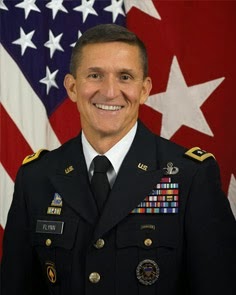 Kimberly Dozier at the dailybeast.com offers a piece on the brilliant military intelligence officer who was reportedly forced into early retired by the Obama administration because he didn't toe the official administration line.

The former head of the Defense Intelligence Agency slammed the Obama administration on Monday as “well intentioned” but paralyzed and playing defense in its the fight against Islamic militancy.

Recently retired Lt. Gen. Michael Flynn called for the U.S. to lead the charge in a sweeping, decades-long campaign against the Islamic State group, al Qaeda, and its ilk—a fight like the one against the former Soviet Union—against a new enemy he said is  “committed to the destruction of freedom and the American way of life.”

“There is no substitute, none, for American power,” the general said, to occasional cheers and ultimately a standing ovation from a crowd of special operators and intelligence officers at a Washington industry conference.

He also slammed the administration for refusing to use the term “Islamic militants” in its description of ISIS and al Qaeda.

“You cannot defeat an enemy you do not admit exists,” Flynn said.