The Politics Of Deception: JFK’s Secret Decisions On Vietnam, Civil Rights And Cuba 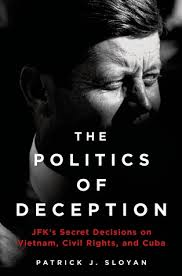 James Srodes offers a review of Patrick J. Sloyan's The Politics of Decption: JFK's Secret Decisions on Vietnam, Civil Rights and Cuba in the Washington Times.

This riveting book is a compelling read not only for correcting a much-mythologized era, but also for reminding us of the harsh and often crass realities that influence all our presidents when they get blindsided by the unintended consequences of their acts.

Author Patrick J. Sloyan is a reporter’s reporter. In a 40-year career that spanned covering the White House for United Press International and the First Gulf War for Newsday, Mr. Sloyan collected a shelf of journalism press awards, including the Pulitzer Prize for International Reporting in 1992.

With dogged persistence, scrupulous archival work and firsthand interviews, he has turned on its ear the sanitized history of the last year of John F. Kennedy’s presidency. He started with the long-awaited release by the Kennedy Presidential Library of hours of audio discs of the secret tape recordings JFK ordered during crucial Oval Office policy decisions taken during those fraught 11 months. He then searched through other presidential archives for the oral histories stored there by other Kennedy aides and tracked down a number of the key participants who were still extant long decades later.

It is not a pretty story, but it resonates. Mr. Sloyan’s conclusions offer no comfort to haters of the fictional Kennedy Camelot nor to the still-thriving industry of the JFK hagiographers, but they explain why seemingly intelligent men do such stupid things when they become president.

http://www.washingtontimes.com/news/2015/jan/27/book-review-the-politics-of-deception-jfks-secret-/?page=all
Posted by Paul Davis at 2:49 AM